Favorite Quote:
"Some of my worst mistakes in life were haircuts" ~ Jim Morrison

It's a musical! Light the lights! Bring out the dancers! Start up a happy song! Wait for that happy ending!

Repo! The Genetic Opera is a totally different musical that what I am used to. There are no huge choreographed dance numbers, or really any sort of stereotypical musical things. The film is filled with blood and death set to a mix of opera and rock songs. Let me set the scene:

In the not too distant future, life itself is failing. Almost everyone has been having organ failures, which led Rotti Largo to found GeneCo, a company that would create replacement organs for those who need them. Most couldn't afford such an operation, so GeneCo created a financing plan: You have this long to pay off the operation, or your organs will get repossessed. Meanwhile, a young girl named Shiloh is confined to her bedroom, due to a blood disease she inherited from her mother. One day she sneaks out to catch a runaway insect and finds she can survive outside. While Shiloh sneaks around behind her overbearing father Nathan's back, he has to hide his true occupation from his daughter. While Shiloh believes he is just a doctor, he is actually the Repo Man, who is in charge of tracking down people who haven't payed off the debt on their organs. Once he finds them, he removes their organs while they are still alive.

This movie, whose climax takes place at the Genetic Opera, has every theme, from suspenseful to comedic, with even a little bit of romance thrown in. In the character Shiloh, is shows the rebelliousness most teenage girls have at her age, as well as the love she has for her father. In Nathan, we see the struggle of being a parent, as well as the everyday battle of having to kill people to make a living. Overall, the movie is fantastic. You hardly even notice it's a musical with how smoothly it flows between song and the little bit of dialog there is. Absolutely worth seeing. 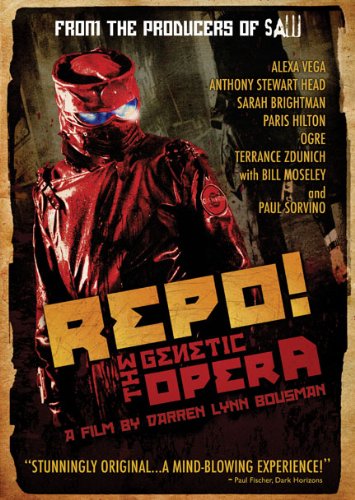 
Buy from Amazon Available on iTunes
The author's comments:
Not enough people have seen this truly beautiful movie.
Post a comment
Submit your own