The Tree of Life | Teen Ink

The Tree of Life

Very rarely does a film make you question the validity of your existence, as well as celebrate it all in the same scene. Never before, have the combination of visuals and music almost reduced me to tears within the first 25 minutes of a film. That’s what The Tree of Life is, art on film. It’s written and directed by Terrence Malick, who fascinates me as a filmmaker. In 1978, he made the critically acclaimed film Days of Heaven and it wasn’t until 20 years later in 1998 when his next film, The Thin Red Line, was released. Many questions are posed by a gap like this, the main being, why did he do it? Searching for an answer, I read an article in Vanity Fair that answered that question. It’s a 6 page article, and I don’t know how exactly to summarize it, but in short, he just didn’t want to make a film unless it felt right. He started production on a film entitled Q, but abandoned it, and fled to Paris with his wife. He spent a lot of time there, just writing, meeting up with people to collaborate on ideas, and helping on rewrites for others. From what I’ve read, Malick is a very introverted man and very appreciative of the beauty of life and nature, which is very evident in The Tree of Life.

Before I continue, please take into consideration, if you have no interest in watching a film that you will not truly understand the first, or even tenth time, or if you do not want to spend most of the next two days either being so angry for sitting through it, or so mesmerized by its beauty, then do not continue reading, and by all means, do not see The Tree of Life. There is constant symbolism, constant incoherence, and constant beauty in its form, that it’s overwhelming at first. Most of the first half hour is comprised of the formation of the universe, shown with breathtaking imagery, accompanied by equally beautiful music, so much so that I was almost reduced to tears by how natural and real it all was. How Malick got some of the shots that he did for the picture, I’ll never know. The main characters are also introduced. The O’Brien family, made up of Mr. and Mrs. O’Brien (Brad Pitt and Jessica Chastain), and their three boys, most notably Jack (portrayed by Hunter McCracken as a child and Sean Penn as an adult), a torn soul who vies for his father attention against his two other brothers, R.L. and Steve (Laramie Eppler and Tye Sheridan). Sean Penn’s Jack isn’t in the film for the purpose of portraying what happens after the boys move out of their home, but more to represent Jack’s realization. The aggrandizement of Jack’s own life, and what it means to him.

I read somewhere that a cinema in Italy showed the second reel of the film first, followed by the first, 3rd and 4th. The ironic thing about it is that regarding the O’Brien family’s story, that would make chronological sense, and so the people in the theater didn’t even notice it at all. This made me think when I actually saw the film, would the impact that it had it on me been different if this had happened in our theater? And the answer I came up with is no. The Tree of Life isn’t concerned with its own non-linear form of storytelling; in fact it celebrates it. What it does concern though, is the message it conveys, or possibly the debate; the debate of nature vs. faith, or even nature vs. grace. Which is more important, the course of nature, or the self-sufficing prophecy of faith and grace? With that being said, that’s my own interpretation of the film, and in no way should give the viewer any kind of bias, because that’s what I interpreted, and it’s my opinion. The Tree of Life poses many questions, and puts a lot of emphasis on the viewer to reconsider everything they know. This is a big responsibility to have for only paying anywhere between $5 and $13 dollars for it. I believe that no two people will interpret The Tree of Life the exact same way, because it offers no answers, in the philosophical use of the word at least. What it does offer though, is insight into a world we have never truly understood, and may never see again.

As I was walking out of the theater, there were two men directly in front of me. One said, “That was the worst freaking movie I’ve ever seen.” Coincidentally enough, these two men were snoring the film away not three rows behind me. When I got home, I began reading some reviews to see what other critics thought of it, and I came across Bob Mondello’s review for NPR. I think he summed up the film best in one sentence: “The Tree of Life is astonishing in some spots, almost incoherent in others and if it doesn't frustrate you at least some of the time ... you're not paying attention.” 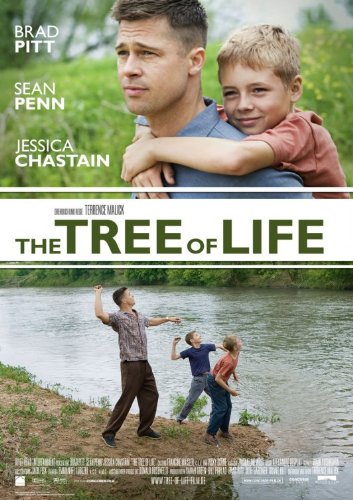