It’s always extremely refreshing when a movie is released that just seems to be made for the sole purpose to make people smile and feel a little better about their life. That’s exactly what Larry Crowne is, and it’s very good at doing so. I don’t think there was any other film this year that made me smile as much as this one did.

Tom Hanks stars as the title character and also produced, wrote, and directed the film. Larry Crowne is a man who has had 9 employee of the month awards, 20 years in the Navy under his belt, and is recently divorced. When the corporate offices find out that Crowne never went to college, he is fired because legally they can’t promote him anymore. On the brink of foreclosure, and nowhere to turn, he decides to go back to college to prevent something like this ever happening again. There he takes a class called Speech 217 where he meets Mrs. Mercedes Tainot, the class’s teacher. The first thought that came to my mind when I saw her was, “This is what the teacher in Bad Teacher will be doing in 20 years.” While she wasn’t necessarily a bad teacher, she was a very unhappy one, who didn’t want to be there. When Mr. Crowne enters class, he brings with him a level of enthusiasm and dedication that no one else seems to bring to the table. Crowne also meets Talia (Gugu Mbatha-Raw), a free spirited but extremely nice student whose dream is to open her own consignment store. She serves as Crowne’s gateway into modern youth. Wilmer Valderrama costars as Talia’s boyfriend Dell Gordo, and steals almost every scene that he’s in. Cedric The Entertainer and Taraji P. Henson play Lamar and B’Ella, Crowne’s next door neighbors who have a garage sale everyday out of their house.

I will admit to the fact that Tom Hanks is actually a very good director, and an even better actor, but it’s the constantly cheesy writing that drags the film down. The dialogue isn’t at all realistic, but for some reason, it didn’t detract much from the film itself, because it still made me smile nonetheless. Larry Crowne also has a surprisingly engaging plot, with just enough humor to make sure the viewer is never bored. The film also is also surprisingly good at blending in adult themes, with universally enjoyable humor to compliment it. I’ll be honest, I’m tired of the constant Twitter references in every movie released this year, but in this, for some reason it actually seemed relevant. Co-written by Nia Vardalos (My Big Fat Greek Wedding), she definitely brought out the female perspective on all of Crowne’s situations, and with ample success. It’s just that amount of empathy and a capacity to relate to the average person that makes Larry Crowne’s almost idyllic existence so…relatable. I was shocked to hear that Larry Crowne holds a 35% on Rotten Tomatoes, while Transformers: Dark of the Moon has a 38%, and Bad Teacher holds a 44%. I would go as far as saying that Larry Crowne is better than both of those films combined. It’s got one thing that the other two didn’t. Heart, and a good spirit. A capacity to enjoy itself and all the other people around it. There’s a feeling of unity and family in Larry Crowne that is sorely lacking in almost all other mainstream films. While it doesn’t get points for its extreme realism, Larry Crowne has joy to go around, and will surely put you in a good mood as long as you’re willing to allow it. 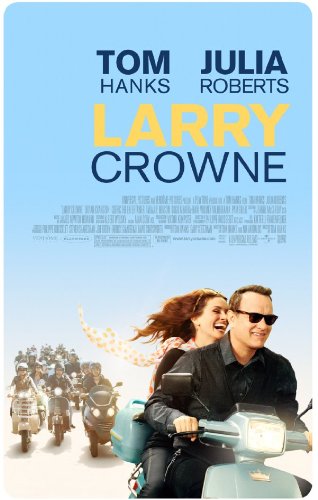