The X-Men franchise as a whole has seen its very fair share of highs and lows. X2 is considered one of the best superhero movies of all time, as well as one of the best movies of all time. Six years later, X-Men Origins: Wolverine was released and was considered one of the worst superhero movies as well as one of the worst movies ever. If I had to gauge where First Class belongs in that spectrum, I’d say right about at the level of X2. Yes, it’s another origins movie, but it’s a damn good one. It seems like Professor Xavier and Magneto’s stories are both much more interesting than Wolverine’s. Played perfectly by James McAvoy and Michael Fassbender respectively, First Class chronicles the beginnings of both characters, as well as their aliases and enemies, how Professor Xavier’s School for Gifted Youngsters was founded, and everything in between.

Heavy on story, and surprisingly light on action, First Class may disappoint some fans of the original trilogy, but will fascinate those looking for something new and fresh. The film plays out more like a James Bond adventure rather than a superhero film. At 132 minutes, this is also the longest of the X-Men films, which has its ups and downs. More ups than downs, but downs nonetheless. The ups include a much better understanding of the characters and their motives, answers to many of the questions fans have been waiting for, as well as time to develop each individual character, humanizing them even, instead of leaving them mysterious and mutant as the rest of the world views them. The downs include some slack pacing in the second act, as well as requiring much more intellectual thought than the average superhero film. Many people will see this as a good thing, as I do, but to the average viewer, it can be somewhat tedious.
Surprisingly enough for a film of this length, sub-plots are extremely few, and all seem necessary to the central plot of the film, as opposed to several separate stories going on at once. Once again, this may bore some viewers, and entice others. Overall, X-Men: First Class is a first class film that really shows the acting chops of all those involved, as well as top-notch directing from Matthew Vaughn (Kick-Ass, Layer Cake) and some excellent writing. As far as superhero movies go, this is as good as it’s going to get this year, and possibly even next. 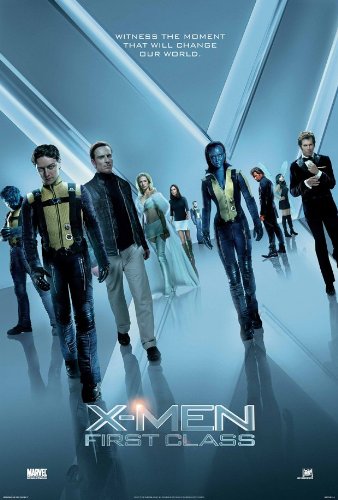