For some directors, it takes 12 years to make a good film. Others only feel confident making a film about a series with such a loyal fan-base that they've, allegedly, attacked critics. Thankfully, Christopher Nolan is not one of these, and more thankfully, “Inception” only resembles those films in that it's going to make a ton of money, and unlike them, it deserves all the praise it's given.

So, let me slow down and tell you why “Inception” is the best movie this year, and why, when you're done reading this, you should head to the nearest theater to see it, provided you haven't already. The basic premise: What if there were people who could slip into your dreams and steal your darkest secrets? What if you could share a lucid dream? The ­concept alone, while not the first movie to play with it, is presented in a neat, structured way.

Nolan does an amazing job conveying the details, rules, and manipulations of dreams and reality, and as the movie builds, his careful attention to detail really shows. The effects are top-notch, from slow motion water movement to the memorable scene of France folding into itself.

Hans Zimmer creates a ­memorable but subtle score (as he did with Nolan's Batman films). For the most part,
the all-star cast, including Leonardo DiCaprio, Joseph Gordon-Levitt, and Ken Watanabe, work well together, and ­almost everyone comes off as believable and sympathetic.

But even the best films have their flaws. Ellen Page, who plays the new crew member Ariadne, completely and
utterly fails to endear her ­character to me. Ariadne is cocky, brash, and overly curious. It's difficult to understand how a talented actress like Page cannot manage to be likeable in “Inception.”

This movie defies the recent Hollywood trend of stories that revolve around the growth of a character and sticks to the older story-driven approach. The characters are, for the most part, static, and serve as set pieces for the main event: a story that unfolds with amazing depth and beautiful storytelling. 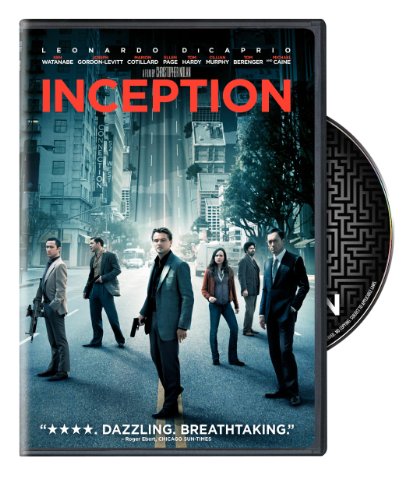 
Buy from Amazon Available on iTunes
The author's comments:
Nick_Xao would like to point out that the Avatar bashing is only in retrospect, and he DID actually like the film.... at one point.
Post a comment
Submit your own

View profile
I totally agree. You summed it up very well and it was an excellent movie. The character of the girl seemed almost a little forced to me, too. Nice job! :)
Nick_Xao BRONZE said...
on Oct. 7 2010 at 9:40 pm
Nick_Xao BRONZE, Roseville, California
4 articles 0 photos 20 comments

View profile
Wow, thanks bud! I'm glad you enjoyed it. Yeah, I hope Inception smashes this January, it deserves too :D
zimmerguy BRONZE said...
on Oct. 6 2010 at 11:44 am
zimmerguy BRONZE, Mesa, Arizona
4 articles 0 photos 2 comments
View profile
congrats!!! ditto on ellen page. she should stick with comedy, although kudos to her for trying a darker side. Inception is one of the best films of the year by far, and deserves to win big at the oscars in january.
Nick_Xao BRONZE said...
on Oct. 5 2010 at 9:48 am
Nick_Xao BRONZE, Roseville, California
4 articles 0 photos 20 comments

View profile
Thanks so much! Glad you enjoyed it!
bluesky0728 SILVER said...
on Oct. 4 2010 at 8:53 pm
bluesky0728 SILVER, Phoenix, Arizona
8 articles 0 photos 107 comments
View profile
Yay for Inception! It's my favorite movie of the year, too! And I definitely agree with you about Ellen Page. She's an amazing actress and I love her, but I don't really think Ariadne was right for her. And yes, Avatar is overrated, and Inception is probably, although acclaimed, underrated. Good, thorough review. And congrats on getting in the October magazine! :)