Ever since the dawn of civilization, there has always been certain cliches that appear everywhere, regardless of form, media, or genre. Among those cliches, there is another select group of cliches that everyone, and I mean, everyone, attempts to use at some point in their lives. I call these the mainstream cliches, and there is practically no one that can use these without sounding like a sequel to a movie that nobody wanted: unnecessary, boring, and uncreative.

Lauren Oliver took a risk when she wrote Replica. I imagine she saw all the other novels about cloning, and thought, I can do this. She took it as a challenge. I will be different and I will stand away from the crowd!

Well, Ms. Oliver, I’m sorry to say that you’ve failed. Miserably. The only thing really unique about your book was the formatting, and I didn’t like that either.

I never liked it when popular media mentioned cloning. Few people took the time to even google search how cloning works, and would immediately just jump start to Oh no! The protagonist has an evil clone! Whatever shall we do? And even when the media did address cloning correctly, it felt like they mentioned cloning just for the sake of mentioning cloning. It has become a lazy plot device. Hm, I can’t think of new villains for the protagonist to defeat. Let’s have him fight himself! But I’m not going to elaborate on my protagonist’s morals and have him go through mental growth! That’s boring! Let’s just bring in a clone that he could fight, regardless of the fact that it’s very improbable for him to have a clone and there’s no reason for one to be there.

Replica is a flip book that tells the same story from two different perspectives. One side is from Lyra’s perspective, a clone who is not actually a clone. The other is from Gemma’s perspective, a girl who is essentially the personification of all the stereotypes adults have about millennials. But she has low self esteem and is being lied to by her parents, so apparently that’s alright. Together they’ll discover the secrets behind Haven Institute… except they don’t. There are more holes in this story than swiss cheese.

I won’t even bother summarizing this story, because there’s barely a story to begin with. All you need to know is both Gemma and Lyra get a boyfriend by the end, and everyone else is unimportant. Who cares about the parents in this book? Who cares that one of the major characters died for no reason? Not Lauren Oliver! Which is ironic, because both sides end with each girl feeling “a little more human.” What about the other people in this book? Are they not human?

While I commend Ms. Oliver for taking a creative risk with the flip book idea, I think it’s best for her to just stick with traditional novel formats. The flip book format didn’t really serve a purpose besides giving librarians a headache while shelving the darn thing. At the beginning of the book, Lauren Oliver has a little author’s note that mentions that she had the idea of the structure before she got the idea of the content, a fact that’s made painfully obvious by the time you finish this book, clones and all.

I give this book a 2.5 out of 5. This novel is bland, both character and story wise, and its female protagonists barely pass the Bechdel test. Oh well. At least it’s still a love story better than Twilight. 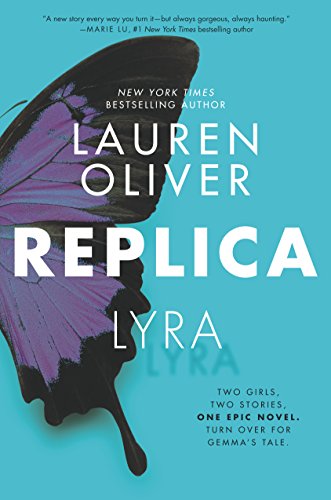