Before We Go Extinct by Karen Rivers | Teen Ink

Before We Go Extinct by Karen Rivers

"J.C., who goes by the nickname Sharky, has been having a hard time ever since his best friend died in front of him in what might or might not have been an accident. Shell-shocked, Sharky spends countless hours holed up in his room, obsessively watching documentaries about sharks and climate change—and texting his dead friend.

Hoping a change of location will help, Sharky’s mom sends him to visit his dad on a remote island in Canada. There, Sharky meets a girl who just may show him how to live—and love—again."

This book was absolutely incredible. It was ALIVE. I could feel it's heart beating right alongside my own. With every page turned and sentence devoured, I fell more and more in love with these characters. Karen Rivers had truly breathed life into paper. Sharky is grieving from the loss of his friend, which may or may not have been an accident when he fell out of a building under construction. As he struggles to come to terms with who his friend actually was, a girl named Daff who already knows the bitter pangs of loss befriends him on the island his father watches over. Over the course of the summer, the two teenagers become closer as they explore their own heartbreak and grief. In the end, we finally learn the secret that Sharky's best friend kept from him, the one that at have just pushed him over the edge-literally. I would definitely recommend this book to anyone. 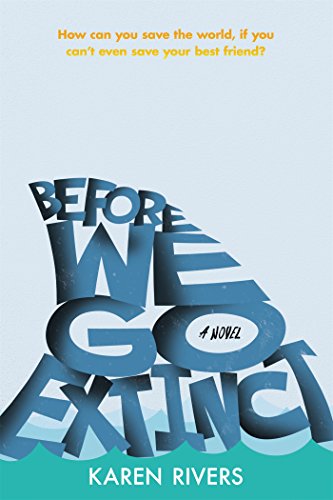