Nectar in a Sieve by Kamala Markandaya | Teen Ink

Nectar in a Sieve by Kamala Markandaya

Favorite Quote:
“Success is not for the weak and uncommitted… Sometimes it’s gonna hurt!” – Eric Thomas


India in Nectar in a Sieve by Kamala Markandaya is vastly different than the India of old. Whether or not this change is warranted is of no concern. In this scene the local tannery is seizing more land for operations. In doing so, Rukmani’s family is forced to flee, and their future is effectively in question. The theme of imperialism is shown through the words it, untended garden, spread like weeds, strangling, and whatever life.


Rukmani’s disdain for the imperialistic new ways is shown by the pronoun it. By not recognizing the tannery as tangible, it appears as though Rukmani is above it. The disrespect in the word it is shown by, “Somehow I had always felt the tannery would eventually be our undoing” (131). One can understand the ill feelings Rukmani has towards it. The tannery uproots her family and Rukmani disempowers imperialism by not making it concrete.
Rukmani's life is now in chaos, yet order can still be found. Next Markandaya includes untended garden to display the aforementioned. The word garden comes from the French word jardin which means order. One can also see untended as both helpless and chaotic. If the two are combined, one sees the order in the chaos. Since being uprooted chaotically, Rukmani has to find order. Nathan and Rukmani do so by assimilating, becoming part of the order. Because of imperialism, they acquired the jobs of writers and stone-breakers.


Furthering Rukmani's hatred is the simile spread like weeds. The term weeds is highly relative in that it is undefined. Rukmani deems the tannery to be a cancerous weed while many others may interpret it as a flower. By choosing weeds, Markandaya’s simile is one pertinent to farms. In doing so, one sees the importance of the farming culture. In context the “weed” is imperialism—the same imperialism that suffocates their culture. Imperialism is rapid as shown by spread. Choosing the word spread shows how the expansion was both quick and uninhibited. Earlier in the novel Rukmani foretells this rapid spread with “Into the calm lake of our lives the first stone has been tossed” (64).


The means by which imperialism progresses is rather violent. In context, the tannery is buying the surrounding lands. In doing so, it siphons the natural resources needed to sustain life. With that in mind, all around must flee or become another cog in the machine. Markandaya’s strangling shows the power struggle between entities. On one hand rapid expansion of power exists within the tannery. However, the other end is quickly losing their antiquated ways of life. In essence the old is forcibly replaced by the new.


Due to its size, the tannery need not care whom it affects. Markandaya shows this through the words whatever life. By saying whatever life in context, one sees how remiss the imperials are in their actions. In order to occupy more territory, the tannery has to displace people. With that in mind, it was rather indiscriminate whom was displaced. As a result this lack of respect is largely due to the sheer size of the tannery in regards to the rest of the populace.
Throughout Nectar in a Sieve by Kamala Markandaya one notices the collective anger of the family. In addition to the anger, there is fear of the future. With that fear comes hatred for the new ways of life brought upon by imperialism. In context that fear is warranted quite early on by, “It was a great sprawling growth, this tannery. It grew and flourished and spread” (47). 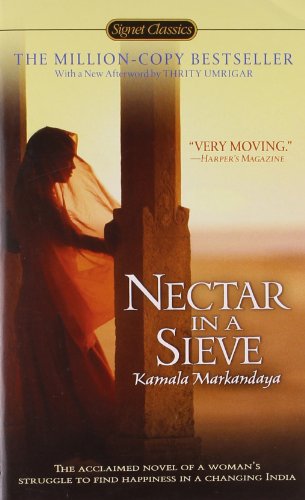