Clockwork Princess, The last of “The Infernal Devices” trilogy, and companion to Cassandra Clare’s “The Mortal Instruments” is a tragically happy love story. It surrounds curious and sweet Theresa (Tessa) Gray, a 16 year old girl, recently rescued by the half angel Shadowhunters of the London Institute through her life as a shapeshifter and shadow-hunting. She finds herself close to the 17 year old sarcastic but charismatic Will Herondale and his parabati, kind and gentle James (Jem) Carstairs. The three of them, along with the others who live at the Institute fend off demons, Mortmain-the villain who wants to kidnap Tessa to get her to complete his evil plans with her powers-and his Clockwork contraptions.
And of course there has to be romance in a book like this. From the very beginning Jem and Tessa were engaged. But as the book goes on it turns out Will isn't the cold, heartless person he portrays himself as. He still loves Tessa despite the fact that he turned her away when he had the chance. “A Tessa shaped cutout of my heart that will never be filled.” And even though she is engaged, Tessa still loves him too, but loves Jem just as much. Jem doesn't know until he has too, which creates quite a messy love triangle.
In the end there were happy little surprises that I didn't expect, and it had an interesting plot twist at the very end. Plus it has a rather dramatic last couple of pages to “go out with a bang.” I expected the book to have a rather disappointing ending, but the only disappointing thing about it was that it was over. Although I would suggest reading the first two in the trilogy before this one because Clockwork Princess references back to them often throught the book. 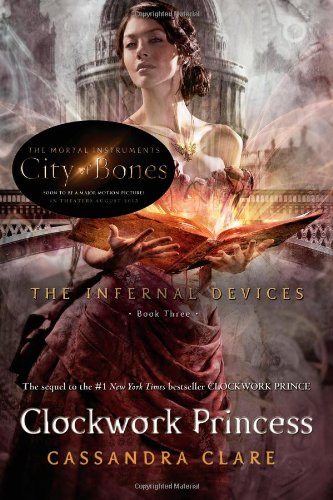