It will come as a delight, though no surprise, to fans: Tamora Pierce has gifted us with yet another masterpiece. At nearly thirty books and counting, it is clear that Pierce has lost none of her renowned brilliance. It’s all still there: the ambient magic, creeping off the page and into your veins; the descriptions of war and the necessary but horrible act of killing; the astute cultural observations and nearly boundless knowledge of social history; and the social commentary that urges us to remember the problems of the real world.


Battle Magic is a prequel to both The Will of the Empress and to Melting Stones, coming between those books and the preceding Circle of Magic and The Circle Opens quartets. For readers who have been concerned by Briar and Evvy’s condition in later books, Battle Magic answers the dreaded question: What happened in Gyonxe?


In keeping with the books surrounding it, Battle Magic makes extensive use of what Pierce calls “ambient magic,” magic that comes from the world around the magic-worker (called a “mage”) rather than from spells or from within the mage’s own being. Descriptions of this magic are, as usual, thrilling; it sings, creeps, races, and burns in an achingly tangible manner thanks to Pierce’s vivid narration. Rarely, if ever, have passages about magic felt so alive and real. The sense of reality is heightened by Pierce’s insistence that everything has a cost; unlike some fantasy stories, in which magic-workers are almost invulnerable, Battle Magic and Pierce’s other books show a sort of magic that can deplete and even kill a careless user. The realistic exhaustion and pain of ambient magic make it all the more believable.


Exhaustion and pain both abound in Battle Magic, even for the book’s non-mages. As the title suggests, the book centers around a war. Pierce has, by now, spent three decades writing about fighters, and not once has she let war seem exciting or glamorous. There are, of course, a few moments of thrill, of unexpected reinforcements and brilliant tactical ideas that just might work, but these moments are rare and set amidst heaps of devastating death. Appropriately, some characters vomit after killing; most are plagued by nightmares. Battle Magic is dedicated “to the veterans,” “because Tecumseh Sherman was right/And war is all hell.” It seems Pierce remembered her dedication; she certainly never slipped into the trap of glorifying war to make her story more exciting.


Pierce’s verisimilitude applies not only to her depiction of war but also to her world-building. Her cultural research is clearly thorough, as always. Her fictitious country of Yanging is recognizable by its food, rituals, and naming conventions as a variant on ancient China; the Realms of the Sun are obviously based on the Indian sub-continent; and the eastern lands as a whole parallel the real-world Orient. Pierce spares no detail: climate, clothing, food, botany, governmental structure, facial features, skin color, and social stratification all go into creating and describing these foreign and fictitious lands.


The cultural research blends seamlessly with Pierce’s ever-present social commentary, without which her writing would not be her own. Unlike the relentless feminism of her early works, Pierce’s recent novels have focused more on slavery and gay rights. Battle Magic is full of both of these themes: Evvy, one of the main characters, is a former slave; Rosethorn, another prominent character, is bisexual and has a committed relationship with another woman. Meanwhile, Battle Magic also revives another bit of social commentary that was more prevalent in Pierce’s earlier works: the idea that war is hell. For the first time in about a decade, Pierce writes about all-out war, and it is obvious her determination to expose its trauma never left her.


As Pierce devotees know, there is another, edgier side to Pierce’s social commentary. Pierce is a child of the sexual revolution, and its influence continues to appear in her literature. It shows up only briefly in Battle Magic, and as usual everything is suggested rather than described. Nonetheless, it is difficult to watch young Briar struggle emotionally with his exposure to his teacher Rosethorn’s promiscuity only to be told that since Rosethorn’s partner is fine with it, he can get his nose out of her business. Whether Rosethorn is right is almost irrelevant; she is depicted as wise and emotionally close to Briar, and as such she owed him more of an explanation.


The only other difficult part of Battle Magic is the pronoun usage. The third person omniscient narrator switches rapidly, without warning, among Briar, Evvy, and Rosethorn, often referring to them with pronouns without establishing to whom the pronouns should refer. While it is possible to figure out, given context and sometimes reading ahead, which person the narrator is following at what time, this requires more effort than it is possible to exert while remaining in the story. The distraction of the pronouns is unfortunate, disappointing, and unnecessary.

Battle Magic is nevertheless a model of what fantasy should be, as Pierce’s books almost always are. The remarkable blend of social and historical realism with a well-developed and unusual brand of magic, topped off with a generous helping of social commentary, makes for a truly excellent novel. It is only in this context that picking apart Pierce’s tiny flaws makes sense; she comes so tantalizingly close to perfection every time she publishes a book that it’s imperative to identify at least one flaw in order to believe she exists. 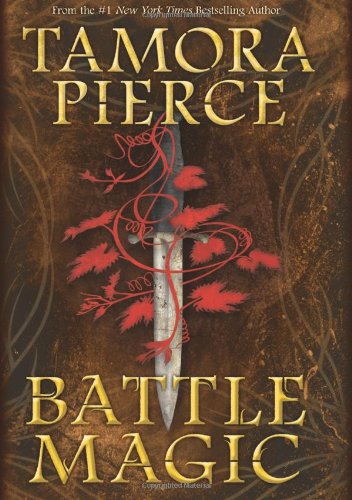