Crime and Punishment by Fyodor Dostoevsky

The book I read was an old time classic by the name of Crime and Punishment by Fyodor Dostoevsky. The main character, Rodion Raskolnikov, is an arrogant, above everyone else kind of character. Then there is Dounia, his sister, who is in love with a low life. Marmeladov, who dies early but was a drunk, and a government clerk who got fired and spends his families money on booze. There is Sonia, who was Marmeladov’s oldest daughter is forced into prostitution to earn money for the family, she will eventually fall in love with Raskolnikov also. There is Razumihin, who has been Raskolnikov’s friend through the whole book. There is the police chief, Porfiry, who leads the investigation in the murders. Then there are the victims, Alyona and Lizaveta, the elderly sister who are murdered by Raskolnikov.
The summary of this book is quite an interesting one, it starts off with a quiet but cocky man, who feels that the law does not apply to him. To prove he is above all law he decides to do something no one in their right mind would dare to do, commit murder. He chooses an old lady that he pawns a watch to but later becomes weary and doesn’t know for sure if this is what he wants to do. After he does this he visits his drunk friend who confides in him about his family, only to be hit by a horse and pass away. Raskolnikov commits the murder and falls ill, from what is believed to be the guilt that overcomes him following the murders. He falls in love with Marmeladov’s daughter after his recovery, but through it all he continues to be tortured by the guilt and shame of his actions, which in all, is his punishment.
A fitting symbol I believe shows a deeper meaning in the novel was the bundle of cash Raskolnikov left for Marmeladov’s family after he died. I believe it shows that although on the outside, he’s a murderer, it doesn’t change the fact that on the inside, he’s actually a good hearted, kind soul, merely just in a confused state of mind at the time.
A can’t miss scene is the scene where Raskolnikov finally kills the sisters, although he didn’t intend on killing both of them. He starts by sneaking into her home and splitting open the old pawnbrokers skull. He even manages to steal a few things from her home when the other sister walks into the house and Raskolnikov is forced to kill her as well. Now, when I read this, I got goosebumps, it was so suspenseful and thrilling, it did a very good job at building that moment and exploding it.
Another can’t miss moment is when Sonia pressures Raskolnikov into turning himself in. This moment shows his acceptance to his crime and his realization that no one is above the law, or basic human morals for that matter, because you are your own worst enemy in the end. Sonia and Raskolnikov go to the police and turn him in, where he is sentenced to 7 years in Siberia.
In my opinion, this book appeals to patient, thrill seekers. It has that suspense and shock but in due time. It takes patience to read this book. Overall, I give this book a solid 4 stars due to it’s deep, well written structure, it deserves all 4 stars. 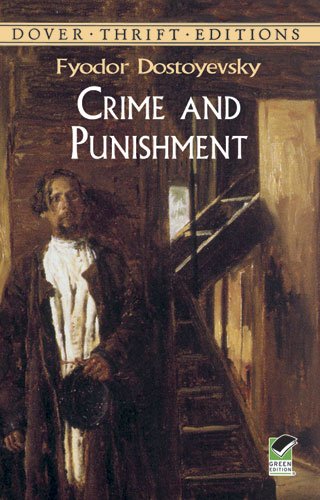