The Yellow Wallpaper by Perkins-Gilman

The death of someone is not always to be taken lightly, but in “The Yellow Wallpaper” it means more than just saying goodbye. One person may be considered insane, even after they have died, but what they accomplished in their life could have a deeper meaning than anyone may think or even believe. An unnamed woman suffering from post-partum depression is trapped within herself, but as the story nears the end, she dies along with the wallpaper after freeing the other women in the twisted tale of “The Yellow Wallpaper” by Perkins-Gilman.

A woman could become insane after giving birth to a baby. This is known as post-partum depression, many women go through this phase after pregnancy. In “The Yellow Wallpaper” the woman has just had a child and goes into post-partum depression. Her physician husband, John, rents an abandoned mansion far from the city. He explains that if she receives the “rest cure” she would become healthy and well again. He tells her, “’Your exercise depends on your strength, my dear,’ said he, “and your food somewhat on your appetite; but air you can absorb all the time” (2). She decides that staying in the large, airy room is better for her. Though all day and all night as she stares at the discoloring, yellow wallpaper trying to decode the hidden pattern makes her seem crazy to everyone that is taking care of her. Anyone that sits in an empty room with no one around would become insane also, especially if she is a woman going through post-partum depression.

Throughout the story she mentions a “second” pattern behind the first and claims that it moves at night and creeps during the day. As she begins to examine it more closely she claims that there are many women trapped behind it. The wallpaper is their inescapable prison. She describes the front pattern as bars trapping them, “Sometimes I think there are a great many women behind, and sometimes only one, and she crawls around fast, and her crawling shakes it all over. Then in the very bright spots she keeps still, and in the very shady spots she just takes hold of the bars and shakes them hard. And she is all the time trying to climb through. But nobody could climb through that pattern –it strangles so; I think that is why it has so many heads. They get through, and then the pattern strangles them off and turns them upside down, and makes their eyes white!” (11). During the nights she watches them and in the daytime she thinks that she can see the women creeping all around the house. She soon feels resolute to rescue them from their peeling prison. In the end of the story, the woman tries to tear off all of the horrid wallpaper to save the imprisoned women. She tears it down in a fit of determination, not letting anyone stop her. She becomes a heroine to the newly freed women, but with every action has a consequence. In this case the most extreme possible consequence, resulting in her death.

It ends with her husband, John, stumbling over her dead body while her ghost creeps along the sides of the ripped off paper and over his fainting body. Everything she has mentioned about the room, the even smootch that fits perfectly to her body and the gnaw marks on the bolted bed were all from her. She thinks it was the children from the nursery, but in reality it never was a nursery; it is a mental ward that once held chains to hold down a patient and the barred windows to keep them from falling or escaping their chamber. Near the beginning she talks about the large, open room and says, “It was nursery first and then playroom and gymnasium, I should judge; from the windows are barred for little children, and there are rings and things in the walls” (3). She truly does not have any idea what is going on. John put her here because he doesn’t understand the mental state of mind; he is a physician he only truly understands the physical well-being of a person. Everything leads up to her death and her becoming a ghost who creeps around in the smootch of her room. It was all because of her insanity which increased due to the yellow wallpaper that was always in mind and sight. However, she still she believes she becomes a heroine for releasing the women that were stuck in the aged, rotting wallpaper, making an ever-lasting impression on the discoloring, yellow wallpaper and the people who took care of her.

Insanity can make a person believe what they do is heroic causing them to even end their own life thinking they completed it after finishing the “heroic” task. “The Yellow Wallpaper” is a significant story that describes a woman, who was never given a name, who gradually goes from sane to insane and eventually her death. She has accomplished an interesting feat that no one would logically do while conscious of their actions. It has fascinating reason to someone who dies, especially a woman that has a terrible case of post-partum depression; there is a new life to fit in with the old. 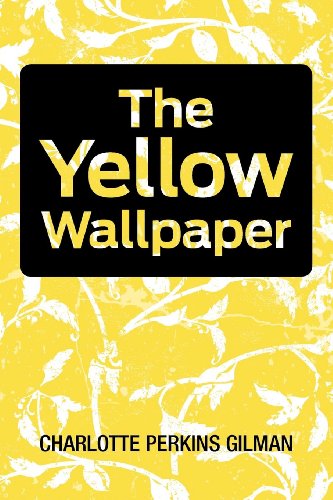 
Buy from Amazon
The author's comments:
This is an essay pertaining to my fact-based opinion to the meaning behind "The Yellow Wallpaper", it is an unusual perspective but I believe this is what the story was explaining.
Post a comment
Submit your own