Nickel and Dimed: On (Not) Getting By in America by Barbara Ehrenreich | Teen Ink

Nickel and Dimed: On (Not) Getting By in America by Barbara Ehrenreich

In the book Nickel and Dimed, Barbara Ehrenreich chronicles her firsthand experiences as a member of America’s low-wage workforce. Ehrenreich’s work depicts the nation’s working poor as barely scraping by. The book thoroughly debunks the notion that any person, with grit and determination, can find a way to rise above poverty. Even though Ehrenreich’s account of the working poor does a first-rate job in exposing the nasty working conditions millions of people face everyday, Ehrenreich, who is a well-known journalist, brings a condescending attitude towards her project which sours the impact of her story.
Nickel and Dimed was seen as a revelation by many readers upon its publication because of its depiction of life on minimum wage in America. Ehrenreich repeatedly emphasizes how it is impossible to survive on minimum wage, especially as the steep prices of rent and food go up while minimum wage rarely grows. Ehrenreich describes poor working conditions, which include long hours of backbreaking work for little money. She forces the reader to see how many entry-level workers are mistreated and the ways in which they are dehumanized by their work. Her discussion of how America’s welfare reforms have not ended the struggling and hardships of the lower class are thought provoking. Even while holding two or more jobs at once, a member of the working poor struggles to make ends meet. For a citizen of the middle or upper classes, Ehrenreich’s disclosures are eye opening. Nickel and Dimed is a call to action to help those who are trapped in the vicious cycle of poverty.
Even with its moving declarations on the dire effects of poverty, Nickel and Dimed often stumbles under its own voice. Another author would have been better suited to undertake the task of exposing the difficulties of the working poor. Ehrenreich looks down upon her fellow employees and is extremely resentful towards her employers. Throughout the book, she spends the majority of the time writing about her constant discomfort in a whiny, grating way. She complains endlessly about the jobs she takes on. In addition, Ehrenreich comes across as “just a tourist” in the world of low-income workers. She is able to leave the low-wage work force whenever she wishes, and often reminds herself of that. For example, when she gets an itch, she calls her personal dermatologist for a special cream. A real member of the working poor would never have that sort of luxury. Ehrenreich never fully experienced what it is like to be in need of money. She has the “safety net” of her affluent life and whenever she feels she can no longer handle her low-income job, she quits the job and returns to her “real” life. Ehrenreich, the educated author, is unable to view her co-workers as equals and regards herself as someone who is too superior to perform entry level jobs.
Nickel and Dimed is a report on the nation’s poverty, one that is moving and thought provoking yet marred by the biases of its author. The book shows how it is nearly impossible for a person to increase their position in society while subsisting solely on minimum wage. Nevertheless, Barbara Ehrenreich’s disdainful attitude throughout the entirety of the book leaves the reader with a bad taste. Had the author been a member of the “working class”, perhaps the story would have been more realistic. Nickel and Dimed is rightly a revelation for the working class, but not a faultless take on the lives of low-income workers in America. 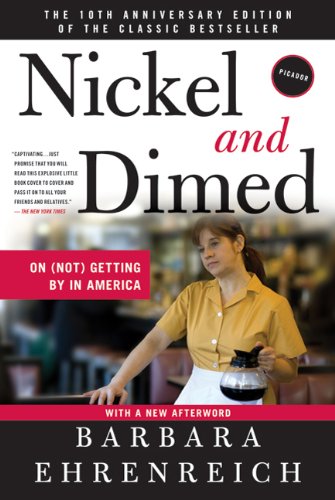