The Thin Man: The Novel and Movie by Dashiell Hammett | Teen Ink

The Thin Man: The Novel and Movie by Dashiell Hammett

"The Thin Man" is a murder-mystery that takes place in 1930's New York City. This book has become a classic for mystery fans everywhere. Dashiell Hammett was a great mystery writer, who wrote books that have become classic novels and movies, such as "The Maltese Falcon," and "The Dain Curse." A few months after "The Thin Man" was published in 1934, it became a motion picture starring William Powell and Myrna Loy. The main character, Nick Charles, is a retired private eye trying to look for some peace. His wife, Nora, does nothing to follow his wishes; in fact, she wants him to go back into detective work so she can help him. he is sucked into the mystery, and after a lot of work, he finally cracks it open.

The novel and the motion picture are very similar, yet very different. For instance, one things that was changed, but does not change the storyline, is the Charles' dog, Asta's, breed. In the novel Asta is a schnauzer and Nick Charles specifically tells someone that he is not a fox terrier. They changed it in the movie so that Asta was a fox terrier. Now, this has no effect on the story at all, but it was just something interesting that I noticed. I also noticed that many lines were taken right from the novel.

"The Thin Man" was a very good book, and is perfect for anyone who loves a good mystery. Dashiell Hammett knew how to throw some comedy in with a mystery. The movie was also very good; you will not be disappointed in it. 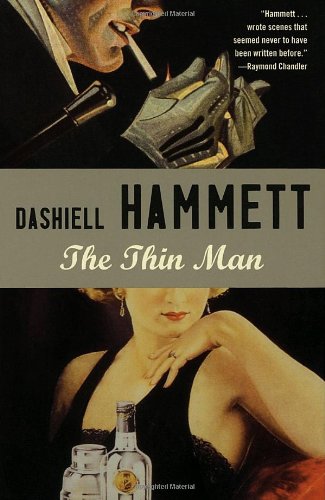 
Buy from Amazon
The author's comments:
I love watching classic movies. I had seen all "The Thin Man" movies before deciding to read the book. Recently I have been on a spree where I compare the books to the movie, so this is what I did here.
Post a comment
Submit your own