White is for Magic by Laurie Faria Stolarz | Teen Ink

White is for Magic by Laurie Faria Stolarz

This isn’t the first time it’s happening. Its one year after Stacey saved her best friend, Drea, from death. Stacey Brown is having more dreadful nightmares, haunted by ghosts of people who have been killed in the past. A transfer student, Jacob, also a witch, is too having nightmares about Stacy being murdered. He is on the hunt determined to stop the killer. Stacey also has been receiving letters with out a name or return address attached. One read, “IN LESS THAN ONE WEEK, STACEY BROWN, YOU’LL BE BEGGING TO DIE!” Though she should be focusing on finishing high school, she is mostly worried about the thought of her death. To make things harder, her relationship with Chad isn’t going the best. Does she like Jacob? Will her horrendous dreams come true?

White is for Magic takes place a year after Laurie Faria Stolarz’s first book in the series, Blue is for Nightmares. Stacey and her friends are currently attending their senior year at Hillcrest Boarding School.

Laurie Faria Stolarz’s has written multiple sequels including Blue is for Nightmares and Touch. She also has won many different awards such as, ALA Quick Picks for Reluctant Young Adult Readers. White is for Magic is mostly directed towards teens, but if you’re up for a fiction mystery you will have fun reading.

White is for Magic is very similar to Blue is for Nightmares. They just about had the same plot. They both were very mysterious. The mood was suspenseful, agonizing, and romantic at certain parts in the story. Since the author grew up in Salem, Oregon, I thought it was pretty typical that the story involves witch craft.

Overall, I thought White is for Magic was a good book. It definitely caught my attention, and at times I couldn’t stop reading. Laurie Faria Stolarz did make if very mysterious, and her writing was very easy and fast to comprehend. All of the emotions really pulled everything together. I enjoyed putting myself in Stacey’s perspective, along with others. Even though I didn’t agree with how every situation was handled, I thought that the authors’ ideas were very bright. White is for Magic kept me wanting to read the rest of the series of Blue is for Nightmares. 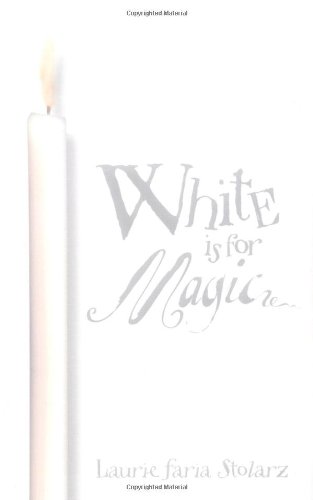