"Manhunt" is the intriguing true story about the chase for John Wilkes Booth. The book is very well written, capturing the suspense, along with every detail, in an hour-by-hour account. Swanson not only sees the hunt from Booth's eyes, but from his accomplices', the calvary, the police, and others involved in the crime.

The pages open with the day John Wilkes Booth decides that President Abraham Lincoln must go. The story carries to the night Lincoln was shot, and tells about the other assassination attempts that night. Swanson chronicles Booth's ride out of the city, and his conspirators' actions. No detail is left out as Booth makes his escape. One learns where he stayed each night, who helped him, and what they did to aid his escape.

The story wouldn't be complete without the manhunters. Swanson writes of the challenges they faced during the chase, the clues they found, and the capture of aids in Booth's escape.

No moment is dull, but the most suspenseful part is when Booth comes face-to-face with his pursuers. Even though one may know what is to come, this book will keep you on the edge of your seat. It is so cleverly written you'll soon forget it is a true account. Anyone who has even the faintest interest in Lincoln's assassination should read this book, for it will expand your knowledge on the subject considerably. 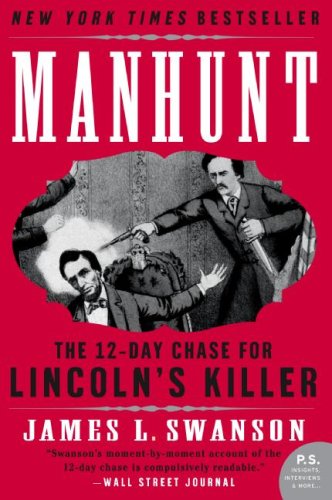 
Buy from Amazon
The author's comments:
I strongly recommend this book to anybody who has an interest in history, it reads just like a good mystery novel.
Post a comment
Submit your own