Sara Gruen's New York Times best seller, Water for Elephants, is a surprising, eventful journey through the secret world of the circus during the Great Depression.

Told from the perspective of 90-year-old Jacob Jankowski, who is unhappily living in a nursing home, the novel details his exploits as a 23-year-old. The memories begin with Jacob as a veterinary student about to finish school. When he gets a sudden call that his parents have died, he runs out on his exams.

Lost as to what to do, Jacob jumps a train and finds himself in the midst of a circus. Although intimidated and pushed around at first, Jacob eventually gets a job that suits him. As an almost-veterinarian he is in high demand, and the ringmaster, Uncle Al, admits him into the show immediately.

Jacob befriends August, the animal trainer, and Marlena, August's beautiful wife and star performer. Jacob soon realizes that August is a dangerous man, abusive to his animals and sometimes to Marlena, with whom Jacob has fallen in love. Jacob and Marlena try to survive the threats and violence of the circus and escape to a better life.

Gruen manages to capture the distant world of a small 1930s circus with flowing narration, clear-cut prose, and spectacular attention to detail. The events are relevant to current culture while retaining historical accuracy. Although the plot is fictitious, the richness and depth of the characters make them very real.

I never expected a circus to be so full of lies and corruption. This book gave me the best visual and emotional experience I have ever had from a novel. The intensity of Jacob's love for Marlena, his fear of August, and his compassion for his friends translate magnificently into words. 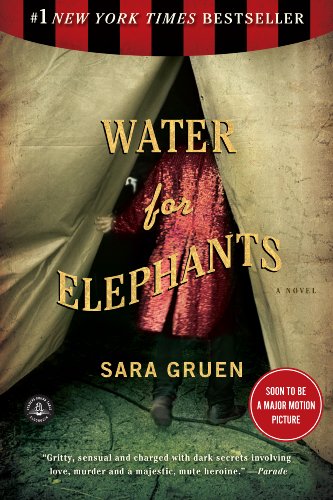