Ray Bradbury’s novel, Fahrenheit 451, is social commentary that is similar to the story of America in the late 20th century. The mind set of the majority of people in Fahrenheit 451 are living in ignorance and bliss as the knowledge that some want or need is being destroyed. Out of this, a counterculture develops that has the goal to protect the books that are being burnt by the firemen. Between these two groups, tensions arise. The majority believes that the books are offensive and creating problems, while the counterculture believes that the books are being used to foster imagination and are forming freedom. Bradbury’s world contains three main themes: conformity, rebellion, and conflict.

The main idea of conformity can be seen in the views of specific characters like Mildred and her friends. Every once in a while, they get together and watch television together and they discuss what happened. Her and her fiends’ lives are being heavily influenced by the ‘family’ in the parlor and by the three huge televisions that Mildred has. They are all acting very narrow-minded throughout the book. An example of this can be seen when Mildred and her group of friends try talking politics. “‘What possessed the Outs to run him? You just don’t go running a little short man like that against a tall man…’ [said Mrs. Phelps]” – (97). This shows how the people in Fahrenheit 451 are basing their judgment more on the appearance of a person rather than his or her platform. Out of conformity; there is a backlash from society that results in a rebellion.

Backlash can almost always be expected when a group of people are forced into a conformist society. These people want to break out of the box that they were put in and start a rebellion. Specific members of this counter culture are Montag and Faber; they both try and protect the knowledge that exists in book. Faber and Montag have different motives, but the same intentions. Faber wants to preserve the knowledge and information within books. And Montag just wants something concrete to believe in and something to make life livable again. “‘We have everything we need to be happy, but we aren’t happy. Something’s missing. I looked around. The only thing I positively knew was gone was the books I’d burned in ten or twelve years. So I thought they would help.’ [said Montag]” – (82). The counterculture is trying to find peace, but this peace through books is causing conflict between the two groups.

The struggle that arises between the conformist society and the counterculture is one of the universal conflicts in the book. This conflict can mainly be seen in an argument between Montag and Beatty. “‘Oh, you were scared silly,’ said Beatty, ‘for I was doing a terrible thing in using the very books you clung to, to rebut you on every hand and on every point! …You think they are backing you up, and they turn on you.’” – (107). This shows that everyone in Fahrenheit 451 has their own opinion of how books should be dealt with. This quote also shows how the counterculture in the books is feeling like their freedoms are being oppresses, and that contradicts with the Bill of Rights.

The conflict in the book never really ended, but it was put in the side saddle for a little while. At the end of the book, the city was bombed and this gave a temporary victory to the counterculture simply because there was no opposition. The bombing of the city also represented the birth of freedom for the counterculture. However; the idea of censorship of books may have been strong in Fahrenheit 451, that this conflict may never be resolved. And if this problem persists in today’s life (China), then how can we expect censorship to end in our imagination? Let’s let the story unfold and see where the censorship question takes us. 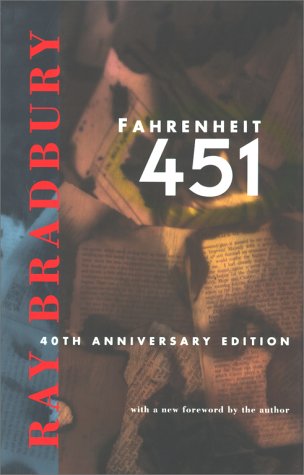