You might have already heard of A Million Little Pieces due to the controversy over whether it qualifies as a memoir or not. I’d suggest for you to disregard this completely because I have found that the hype revolving around this book was very well-founded. Fiction or not, the covers of this novel envelop 400-some pages of love/vulnerability, desperation/hope, destruction, and second chances.

James Frey, at the age of 23 awakes on an airplane and finds himself with four missing teeth, a hole in his cheek, a broken nose, and his clothes covered with vomit and blood (among even worse substances). He is wanted by authorities in three states, is coming down from a high, and doesn’t have any ID or money on him. His devastated family checks him into a famed drug treatment center and Frey is told that he can either quit now or use again and die within a couple days. Your browser may not support display of this image.

“I start shaking. Shaking shaking shaking. My entire body is shaking and my heart is racing and I can see it pounding through my chest and I’m sweating and it stings [...] I am lost. I am completely ******* lost.” This is just the beginning of Frey’s miserable descent from a long cycle of drug and alcohol abuse.

At this drug treatment center, Frey encounters both delightful and malicious characters. He befriends a federal judge, a former boxer champion, and a famous jazz musician, all with heart-breaking stories, and all in rehab for essentially the same reason as he. However, the character that stands out the most is his mobster friend, Leonard (who is also in My Friend Leonard, the sequel to A Million Little Pieces). Despite Leonard’s shady background and line of work, he is like a father to Frey. He takes care of Frey, and acts as half of his support. The other half is Lilly – a sad, vulnerable girl who Frey falls in love with.

“We have wasted too much [life] she and I and the others like us...We have to hold on to what we have left. Fight for it. Cherish it. Try to survive it [...] Try to survive myself so that I can love her.”

Above all, Frey’s writing style is cutting, sharp, deadpan…and graphic. The genuineness of his writing provides a framework parallel to the story itself. The unusual use of capitalization, spacing, repetition, and lack of punctuation provides the story with a remarkable rhythm. Frey is heart-wrenchingly honest and the reader finds him/herself hurting along with every defeat and rejoicing over every triumph. Although this book definitely has its flaws, it is impossible to put down. It is gripping; it is inspiring. It allows you to step outside of yourself and adopt a new view. Four out of five stars. 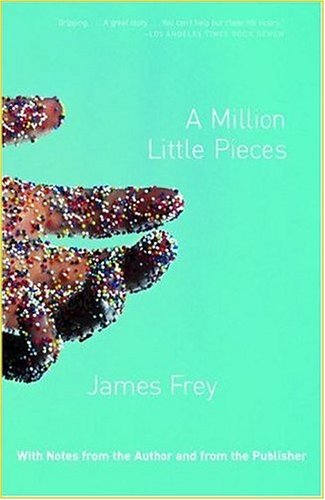