By Natasha A., Warsaw, Poland

It’s the moment you’ve all been waiting for. You’ve read Holes and seen the movie, and loved them both, so how could the sequel be anything but fantastic?

As it turns out, Small Steps is like a trip to the dentist - it’s slow, painful, and leaves a bad taste in your mouth.

Small Steps tells the story of Armpit after he comes home from Camp Green Lake. He is shadowed by his past, since everybody expects the worst from a delinquent, though - amazingly - he has transformed from Tough Guy to Mr. Rogers. The only person who sees beyond his reputation is his ten-year-old neighbor Ginny, who has cerebral palsy. But just as Armpit’s life seems to be getting back to normal, X-Ray shows up with a money-making scheme that leads to him meeting the famous Kaira DeLeon.

Kaira is a rising star, but Sachar’s attempt to get into Kaira’s head is unsuccessful. He uses the cliché character of El Genius, the evil manager who can’t wait to get his hands on Kaira’s money; Kaira, of course, is a perky girl who doesn’t see it coming.

After reading Holes, an excellent novel filled with twists and interesting characters, Small Steps is a disappointment. Sachar chooses a dull character to write about, and in an effort to make his book interesting, puts Armpit in a series of events that are not believable. I find it hard to imagine that a teenager who was sentenced for brutally beating someone in a movie theater would spend his free time caring for his neighbor. It’s about as probable as a Crip walking his granny’s French poodle. I also found it odd how Armpit, really a nobody, gets to meet Kaira and become acquainted with her.

Another irritating factor is the way Sachar writes Ginny’s dialogue: “Is-Is-Isn’t th-th-th-is a-an-an-annoying?” We get the point that she stutters! When you write about someone with an accent, you don’t write the whole book saying, “Aye, em uh Rashan!”

It seems that Sachar has lost his zest. The ingredients are wrong and just don’t mix. Sachar has used the recipe from Holes but Small Steps is just half-baked. Dough, anyone? 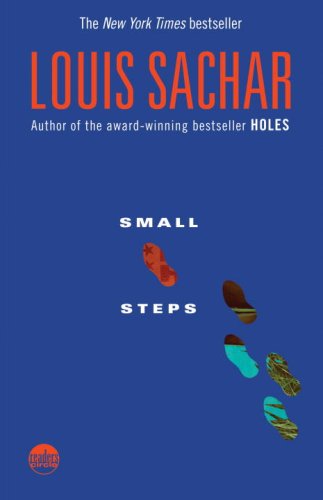 "You miss 100% of the shots you never take" -Wayne Gretsky

"Oop! The Moment! Once you miss it, it is gone forever!" -Henri Cartier-Bresson

"You miss 100% of the shots you never take" -Wayne Gretsky

"Oop! The Moment! Once you miss it, it is gone forever!" -Henri Cartier-Bresson

View profile
I respectfully disagree. Sacher transformed Armpits life around by changing his future in a positive way. The story is all about a surprising turn of events, as what happened in Small Steps, and hundreds of other books. Though the "irritating" stutter that Ginny displays may be annoying, it only seems necessary for Sacher to write it that way. Yes, there were some dissapointing factors pertaining to Small Steps but not as many as you suggest.
Smile-And-Wave-Boys. SILVER said...
on Oct. 3 2011 at 4:09 am
Smile-And-Wave-Boys. SILVER, Rotherhithe, Other
8 articles 1 photo 38 comments

View profile
After I read Holes, when I found out there was a spin-off book, I was really excited. I read it, and was slightly dissapointed. It wasn't as good a book as Holes, but it wasn't horrible.
Hippiealien SILVER said...
on Jun. 17 2011 at 6:56 pm
Hippiealien SILVER, Fair Oaks, California
7 articles 5 photos 43 comments

View profile
I didn't hate it but it wasn't Great. The Only thing is,the stuttering wsn't annoying and honestly without seeing it actual diolouge it just doesn't work..
Loveandboxing PLATINUM said...
on May. 2 2011 at 6:21 pm
Loveandboxing PLATINUM, Levvitwon, Pennsylvania
29 articles 0 photos 70 comments

Favorite Quote:
Eat, Sleep, Sing (by me)
Writing is an art few people master it. -me

View profile
I didn't enjoy small steps either, but I don't like how you made fun of the young girls speaking. Sachar was going off of real people with the problem.
TheJust ELITE said...
on Apr. 10 2011 at 2:35 pm
TheJust ELITE, Ellenton, Florida
254 articles 202 photos 945 comments

View profile
I didn't mind that he wrote about Armpit, but the fact that he changed his character so much. In fact, he made it seem that Armpit didn't like Stanley and yet in Holes it seemed that they were really good friends. It sucked that he made the hero of his first book to be a loser in the second.
TheJust ELITE said...
on Feb. 20 2010 at 11:05 am
TheJust ELITE, Ellenton, Florida
254 articles 202 photos 945 comments

View profile
I didn't like Small Steps. Holes is one of the best books ever, but if you didn't plan on writing a sequel then it most like likely won't be as good as the first. It really disappointed me. Sorry
smalltownwrite210 said...
on Oct. 21 2009 at 7:39 pm
smalltownwrite210, Apex, North Carolina
0 articles 0 photos 19 comments
View profile
hahahahha "dough anyone?". good one. love the review. i agree, it was a let down.
MindyfromIndy said...
on Jul. 14 2009 at 10:08 pm
I don't agree at all! I loved Small Steps almost as much as Holes. It had a little bit of everything. Comedy, romance, drama, ect. The novel shows how people deserve second chances. I do agree that it is not Sachers best, but it is far from his worst.
sheximiss..callme! said...
on Jan. 18 2009 at 5:29 pm
I, like the comment before, think that you did indeed hit the nail on the head. Sachar made me belive in a good writer, but instead created a bad name for himself. He just spoilt the storyline after holes, i mean, why not X-Ray to write about? And his events were like you said, soooo unbelievable!!! Well done it was a great piece of literature that i pored my heart and soul into. I MEANT UR COMENTS, BTW!! lol

gdgd job!
shusharen said...
on Oct. 5 2008 at 12:45 am
I think you've absolutely hit the nail on the head with this article. I was expecting practically a work of art from Sachar after Holes, but instead we got s-s-something else.