The Most Improved Swimmer (to the Sixth Power) | Teen Ink

The Most Improved Swimmer (to the Sixth Power)

Swim coaches have a secret. Every swim coach in history has known what I am about to reveal. I am not a swim coach, but I still have full understanding of this hidden knowledge. It takes sophisticated deductive reasoning. The secret concerns the mysterious award granted to the “Most Improved Swimmer” in each age group on a summer swim team.
The general public believes that this award is granted to swimmers who show great improvement in stroke, times, placing, take-offs, and finishes. What I am about to reveal may be shocking (unless you are a swim coach, of course). To those of you who have been given this award as a child and believe it was because of your great improvement abilities – I truly am sorry for what I am about to say. The truth about this award is that it is given to someone who is usually very bad at swimming but comes to practice anyway. It should be called the “Most Tenacious/Dedicated Swimmer,” not Most Improved! This is not folklore, this is the truth: you do not need to improve even one hundred-millionth of a single second in any swimming stroke to win this award. Being a six-time recipient of this very award has clued me in to this fact.
I understand swim coaches feel bad for the “weaker” swimmers and like to reward them with hardware. Children love shiny things. I did too, when I first was given the award in 2003. I remember it being so fun that I had won this trophy. I was eight and had never swum a stroke of anything in my life before that season. I happily stuck my award on my shelf and assumed in an eight-year-old sort of way that I was now a good and “improved” swimmer. In truth, I was awful. I was afraid to flip off the wall and jumped in the water instead of diving at take off.
Over the next three years, I barely improved and was confined to the JV relay meets. In 2006, at the age of 11, I was granted my second Most Improved Award. I remember being shocked, because I had not improved at all. Yes, I went to practice every day, but no fast (or even mediocre) time came my way. One year later, the end of the 2007 season came around, and what do you know – I won the award for my age group! Even at age 12, I wondered why I was the lucky recipient again. I bet you can guess what came next. Yes, in 2008, a year in which I added eight seconds to my freestyle, I was determined to be the “most improved”. As this was my fourth award, I was coming to expect it. In 2009 I joined a club team. This winter club was tough and grueling. I went often, was in a lane with children about five years my junior, and dropped very little time. As you may guess, I was given the most improved award for the club team. Since I was slightly more aware at age 14 than at age 8, I had begun to see how this award was given. I finally knew at that point that it was not my “constant improvement” that had won me this award. It was pity. 2009 rolled around, and surprise - I received the award again. In that season, I had added time in every single event I participated in. The coaches still gave a speech about how I was progressing with my strokes. For the sixth time, I heard them talk about my ‘improvements’.
My final test in making sure my hypothesis was correct came the following year. In 2010, I was on the summer team but rarely came to practice because I was working at the pool as a lifeguard. Instead of practicing, I sat in the sun and watched my team. Somehow I had dropped time on my strokes, only because my performance at the beginning of the year was beyond dismal. Did I get the award? No, a girl who came to practice all the time did. My theory was solidified, and can now be used to help generations of swimmers win trophies because they now know what to do. Simply come to practice! I may not win the award anymore, but I still am on my summer team – and probably known as “that girl in the slow lane who used to win everything.” 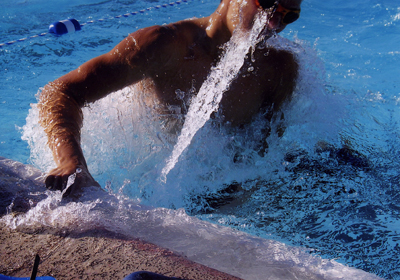 The author's comments:
in my ten years of competitive swimming, I have always been a weak swimmer in spite of my years of commitment to the sport. These experiences inspired me to write about the awards given to swimmers like me.
Post a comment
Submit your own

NotJustAGirlJustMe said...
on Oct. 11 2013 at 7:25 pm
Great article! It's so true. My freshman year of high school I won Most Improved. While I did improve throughout the season, I don't think that I was the Most Improved at all. However, I never missed practice (even those terrible mornings!). I don't think that I sucked, but I just wasn't as good as the other girls, and I guess that my coach just felt that I deserved something. So don't feel bad about getting Most Improved. It just means that they appreciate your effort! :)