As Different as the Sun and the Moon | Teen Ink

As Different as the Sun and the Moon

My two best friends are about as different as can be. They don’t hang out very often but when they do the contrast is startling.Everything from the type of music they listen and the movies they watch, to their style and sense of fashion and even how we do our sleep-overs vary greatly.Mellyssa is 6 months older than me but acts 6 months younger. Naomi is 3 years younger than me but acts my age.Mellyssa loves to watch parody movies and action adventure, Naomi thinks parody movie are pointless and that the humor in them is stupid.She prefers fantasy movies and romantic comedies,something Mellyssa can’t stand. She thinks romantic comedies are sappy and predictable.Mellyssa reads manga and Anime series where as Naomi reads teen romance novels and anything to do with vampires and werewolves,none of which Mellyssa enjoys. Their taste in music varies as well. Mellyssa listens to light Japanese instrumental and Anime theme songs as well as indie rock bands. Naomi prefers to listen to anything that has to do with inner pain and enjoys Opratic Metal. Their style and fashion sense give a visual to their contrasting personalities. Mellyssa wears whatever is comfortable, where as Naomi’s purpose is to make a statement while still being stylish. On any given day you will find Mellyssa in a pair of baggy jeans,a guy’s t-shirt and knee high stocking, incorporating red into her outfit whenever she can. However you will usually find Naomi in ripped and bleached skinny jeans,and t-shirt with a band logo on it usually in varying shades of gray and black.She always wears make-up. Usually smoky dramatic eye shadow is her focus, whereas Mellyssa has never even touched a bottle of mascara.She usually just runs a brush through her hair and lets it do it’s thing, where as Naomi spends about 10 min each morning styling her hair trying to get the most dramatic and fitting look.But the most dramatic difference is noticed when we have sleepovers. A Mellyssa’s we pop a pizza or two in the oven,grab a bag of chips and some soda and that’s our dinner. At Naomi’s however her Dad often cooks,we sometimes help. Everyone sits down and eats at the same time, where as at Mellyssa’s we usually eat on the coach whenever we get hungry.At Mellyssa’s we do a variety of things such as going on walks,cruising the Internet and mocking movies,especially dramatic ones. At Naomi’s we usually play Sing-Star Karaoke until her parents tire of our painful impersonations and then retire to her room and watch a romantic comedy on Netflix and usually go to bed around 12:00.At Mellyssa’s however we get sugar high and stay up until the wee hours of the morning making fools of ourselves, tapping it and then posting it on YouTube for the world to see, we then crash and sleep until 11:30-1:00 the next morning ,where as at Naomi’s we are usually up by 9:00 and often cook breakfast for ourselves . At Mellyssa’s we usually eat lunch because of the time we get up. I can’t say I prefer one over the other,they are both my best friends,just different.In considering all this I guess one of the few things they have in common is me. 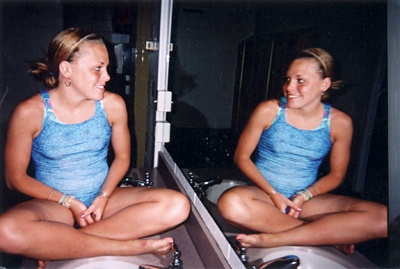 The author's comments:
I wrote this as a compare/contrast essay for English class.
Post a comment
Submit your own