Halloween at My House | Teen Ink

Halloween at My House MAG

Halloween - a day to experience the joys of rotting your teeth. Sure, sounds good for the kids, but for candy suppliers, it can be a living nightmare.

"Can I please go trick-or-treating, Mom?" I asked.

"No!" my mother impatiently roared. Even though she seemed really annoyed, I continued.

"Because," she replied, even more annoyed. It seems like the answer to everything when parents are annoyed is, "Because," or "You're grounded!" Good thing it wasn't the latter.

"Because there is no one who can go with you, and I don't want my 13-year-old wandering the streets on Halloween. Didn't you hear about that girl who was almost abducted the other day? She was your age, you know. That happened just a mile away. Sorry, but you're going to have to stay here by yourself."

As she spoke, I rolled my eyes and made little motions with my hands as I said, "Blah, blah, blah." Gosh, there should be a limit on explanations. I think parents should say more than "Because" but less than a paragraph about current events or their childhood.

Even so, I begged, I pleaded, and I showed my puppy-dog eyes. I even gave my famous "If I don't go trick-or-treating, I will end up really, really depressed for the rest of my life" look. Nothing worked. I even pointed out that four people had invited me to go with them, but she just replied that it was too late.

"Oh, come on, we've got two minutes until trick-or-treating starts," I argued. Although it seemed a pretty good argument, it didn't fly.

"No, and that's my final answer!" she bellowed.

"Okay, Regis," I laughed. I thought it was funny, but my mother didn't get the joke. She just gave me some simple instructions.

"Don't burn the house down; keep all the lights off because we don't have any candy, and don't break any laws. Also, do not pass go; do not collect $200." She laughed at what she thought was a joke.

She left, and I pouted for what I thought was forever but was really only a minute. Then I snapped my fingers and I said, "I should do my language arts homework!" I smiled as I thought about my splendid breakthrough. I walked over, or shall I say, I slid over on our new, really cool slippery wood floor to the computer. I gently pushed the "on" button with my toe. It was just too hard to bend down and push with my finger.

Then I heard the sound of trick-or-treaters in the distance. I thought over what my mother had said: "Don't pass go, don't break the law, no lights ..." Oh, she said no lights. I think that includes the computer. But I didn't turn it on just to turn it off again. That's when I heard a little kid yelling, "This one's here! There is a light on! The person is in there! Quick, come on, we need more candy," the desperate child screamed. I was scared. This kid sounded like he would do anything for candy. I quickly shut off my computer and hit the floor in the really cool army crawl I've seen in movies. I'd always wanted to try it, but not in a life or death situation.

I crawled through the living room and hid between the sofa and loveseat. Nobody could see me there. I heard the thunder of two or three wild kids on my porch. I gasped as I heard the door handle being rattled, followed by an insane banging. It seemed like they were going to break the door down.

Finally I heard one of them say, "I don't think they are home. Next house." I got up and started walking around until I heard someone yell, "Look, I see that girl's head! Someone's in there." Again, I got on my stomach and did the army crawl. I was getting pretty good at it. But the kids immediately started pounding on my door. Just when I thought they were leaving, they appeared at one of my windows. I was scared stiff. They went to every window they could reach and only gave up when they realized they were wasting their time.

The night continued like that. When I couldn't handle it anymore, I went to my basement and stared at the wall. Actually, I couldn't really see it so I stared into darkness. I couldn't read, watch TV, or do anything. I thought of stupid things, like running around pretending I was an FBI agent arresting criminals.

I felt like I was losing my mind. Then I peeked out of a tiny window at the trick-or-treaters and laughed at them, especially one parent who stole his kid's candy. Hey, if the kids want to treat me like that, then I can laugh at them.

I wasted two hours doing stupid things. I even discovered a new game called "Try to make it from my bedroom, all the way down to the living room, through the kitchen, and down the basement stairs without being seen." I played "Hot Lava," and even carried on a few conversations with myself. The good thing about talking to yourself is that nobody interrupts.

I felt so happy when I heard the siren that ended the trick-or-treating. I turned on all the lights and laughed at all the trick-or-treaters gloomily walking home. Halloween was pretty bad that year, but I had a little fun. I would have had more fun trick-or-treating, though. The lesson: do what your parents tell you, and that includes not passing go. 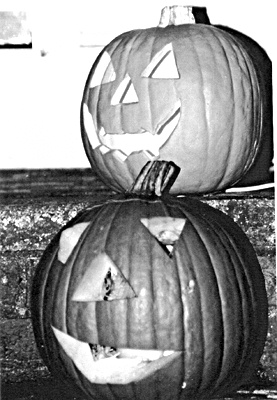