Hundreds of anthologies of poetry exist, dealing with a myriad of themes and subjects. However, small portions of those poetic anthologies focus solely on the twentieth century. Twentieth-Century American Poetry, edited by Dana Gioia, David Mason, and Meg Schoerke, is one the few well-written anthologies that focuses primarily on American poetry and poets. Unlike most anthologies that deal with American poetry which tend to feature exclusively the poems of the more popular American poets, Twentieth-Century American Poetry highlights the work of the less celebrated American poets as well. In addition, Twentieth-Century American Poetry includes a small yet detailed biography of each the featured poets. Moreover, it celebrates the poetry of a variety of poets, including women, poets of a different race other than the popular Caucasian poets, and poets of varied religions and beliefs. The editors—two of which have included some of his poems—have succeeded in editing an anthology of American poetry and poets of the twentieth century, due to the following factors. The overall tribute to twentieth century American poetry and poets, the addition of unfamiliar, as well the well known, poets, all of different beliefs, backgrounds, race, and philosophies, and the detailed biographies of each of the featured poets are what differentiate this anthology from all the other anthologies dealing with the same topic and make it enjoyable to the read.

As the title implies, Twentieth-Century American Poetry deals exclusively with the poetry of twentieth century American poets, including over 180 poets. The twentieth century was a revolutionary epoch for poetry, because new voices—women (although women had all ready been writing poetry), blacks, Asians, Latinos, etc.—began to opine new philosophies and introduce new styles for writing poetry, as Ezra Pound’s motto stated “Make it new.” Additionally, poetry was no more a form of entertainment but also a mode for voicing one’s opinion—dissatisfaction too—of current issues, political, cultural, and moral. Poetry became the method for many poets to broach publicly the then taboo, such as child labor, women’s rights, abortion, rape, abuse, Communism, racial prejudice, and drug use. The twentieth century broke the final traditional reigns of poetry. Poetry now allowed the poets to voice the hushed inner feelings of the clandestine self in any way possible without the worry of being judged—but with the hope of being understood.

First, Twentieth-Century American Poetry includes a detailed—though brief at times—biography of each of the featured poets. Gioia and the other two editors include a list of all of the poets’ woks, including their prose works and all other substantial information, such as birth and death—if deceased all ready—dates, accolades, family relations, and the periods in which they wrote. The editors highlight the zenith, as well as the nadir of each of the poets. For Robert Frost, Langston Hughes, and Denise Levertov, the editors have added a photograph to compliment their biographies. Furthermore, alma maters, former occupations, and location of residence are included. Moreover, the biographies contain the philosophy of each of the poets. For example, the following paragraph details Allen Ginsberg’s philosophies.


drug use and his poetry writing. He wrote Part II of “Howl” under


the influence of peyote, “Denver Doldrums” on Benzedrine, “Wales


and his introduction to yoga and meditation gradually turned him


away from drugs as sources of liberation and inspiration…. In 1972


Ginsberg finally declared himself a Buddhist and developed a close

Another example of the inclusion of the poet’s philosophy or worldview is the following sentences dealing separately with Robert Frost and May Swenson.

Yet Frost’s worldview is indisputably modern. An agnostic, he


saw humanity as alone in a universe seemingly devoid of meaning


yet fraught with the terror of pain or extinction.


[A]lthough she [May Swenson] was brought up in the Church


of Jesus Christ of Latter-Day Saints, she became skeptical of


biblical fundamentalism and Mormon scripture when she was
was a teenager. Out of love and respect for her parents, she made
no grand break with the church, but slipped away gradually.


The emphasis added on the poet’s worldview is important to the reader because the poems reflect the philosophy of every poet. The editors Twentieth-Century American Poetry have done a fine job in detailing the life of each of the featured poets and more importantly depicting the poet’s worldview.

Second, Twentieth-Century American Poetry celebrates the lesser-known American poets of the twentieth century such as Christian Wiman, X.J. Kennedy, Larissa Szporluk, Kay Ryan, Yusef Komunyakaa, Rafael Campo, and Kevin Young, as well as Dana Gioia and David Mason, two of the editors. This anthology introduces the reader to many poets the reader might have never heard of prior to reading Twentieth-Century American Poetry. Poets such as Thomas McGrath, Hart Crane, Carolyn Kizer, W.S. Merwin, Joy Harjo, Jorie Graham, Lyn Hejinian, Judith Ortiz Cofer, and Rhina Espaillat were poets that I had not heard or learned of prior to reading this anthology. Now, however, due to reading this anthology I have learned several “new” facts of each these poets and have learned to appreciate their works, as well as the works of other lesser-known American poets.

Third, Twentieth-Century American Poetry, features a myriad of poets all of different races, backgrounds, and religions. The twentieth century loosened the reigns of prejudice against women, blacks, Hispanics, Asians, Indians, Catholics, Communists, etc. Some of the female poets included in this anthology are Sara Teasdale, Elizabeth Bishop, Amy Lowell, Adrienne Rich, Anne Sexton, Marianne Moore, Dorothy Parker, Gertrude Stein, and Louise Began. The black poets include Langston Hughes, Counter Cullen, Gwendolyn Brooks, Lucille Clifton, Paul Laurence Dunbar, Claude McKay, and James Weldon Johnson. Twentieth-Century American Poetry celebrates poets of all backgrounds, races, and religions. For example, T.S. Eliot was a Catholic poet during the latter years of his life, and Robert Lowell was Episcopalian at first then became Catholic, which he would reject during the latter years of his life. Once again, the emphasis of different race, religions, background, and education means that each poet teaches a different philosophy in his or her poem.

Additionally, Twentieth-Century American Poetry features an array of poems of different genres: sonnets, free verse, haikus, cinquians, odes, lyrics, cantos, etc. The twentieth century brought to light many forms and genres of poetry. Poets began to express themselves poetically through new forms of poetry rather than using the traditional forms such as the sonnet or ode. Furthermore, every genre of poetry reflects the creativity and philosophy of its author. Free verse became one of the most popular genres of poetry during the twentieth century as poets began to revolutionize poetry. Gioia, Mason, and Schoerke feature almost all, if not all, genres of poetry, from E.E. Cummings’s whimsical free verse to Edna St. Vincent Millay’s English sonnets to Ezra Pound’s cantos.

Fourth, Twentieth-Century American Poetry celebrates American poetry with the hope of a new century of fresh poets rising to achieve the status that the predecessor achieved and to release the remaining barriers of poetry. This anthology highlights not only the poems but also the poets, a thing most anthologies lack. The diversity and ingenuity of American poets is commemorated with much zeal, hoping once again that the heirs of these great poets inherit the creativity of their precursors.

The only negative to Twentieth-Century American Poetry is that not all of the poems are fully wholesome. Some poems like E.E. Cummings’s “i sing of Olaf glad and big” contains some vulgar words. In addition, because the editors have included poems of dealing with various themes, some poems contain Communistic and offensive references and themes. Nevertheless, every poem rightfully belongs in this anthology, because they reflect the innovativeness and philosophy of each author.

Twentieth-Century American Poetry celebrates the century when American poets revolutionized poetry and, in return, poetry revolutionized the country as well. The detailed biographies, the featuring of both unfamiliar and popular poets all of different backgrounds, race, and religion, and the overall celebration of American poetry make Twentieth-Century American Poetry an enjoyable read to any avid reader who enjoys reading poetry and to any aspiring poet, seeking for exemplars to emulate. 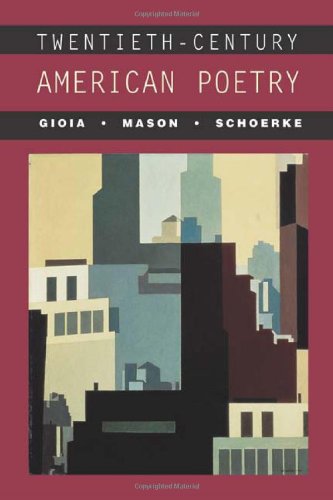