There is something addicting about the crunch of bone - something that compels me to search, to seek out that thrill from hearing that last primitive scream before the victim leaves this earth forever.
Such is the case now. It’s been too long since the last real challenge, but soon enough my thirst will be quenched - with blood. It’s harder than you’d think though, to pluck a soul from the midst of its fellows and send it packing to another realm of existence. Because I don’t do what others like me do. I don’t pick on the weak and friendless. I hunt the strongest, and sometimes I fail. I will not this time.
My prey never learns until the end that I am on their trail. I’ve made sure that every time they happen to glance around, I’m mixed in with the general surroundings. Still, I usually prey on the already paranoid. I find it gives them a sense of happiness, even in death, to know that they were right and the world truly is out to get them. So they’re nervous even before they know of my existence. They huddle in groups, thinking to blend in so I don’t notice them. They think that if they’re in a crowd, I can’t find them. Hardly. A master like me doesn’t need to worry about flocks of fools getting in the way of the hunt. But I’m selective. I don’t want them all dead - just one.
My target is strong, large, one of those young males who dearly longs to head the pack he runs with. He’s in the prime of life, perfect for someone like me to cut down. I’ve watched him grow from a little thing, weak and shuddery, taking his first steps, to the strapping boy he is now. I felt bad about killing him as a baby. Not so much anymore.
It’s been days spent stalking him now, and I’m closer than ever to accomplishing my goal. He is within my grasp now, and within minutes, he will be dead. He’s sensed a threat, and has spent every last minute of the few days with company. He likes to tell them that he’s protecting them, but I know that he’s just hiding from creatures like me. Except now, his ‘protecting’ has gone on long enough.
I watch, a smile spreading on my cunning face, as one of the other pack leaders whirls on him, anger on his face. This one is older and wiser - he would be more of a challenge, but his death would not provide the same amount of pleasure. He would never fall for my tricks. He is the one truly in charge here, but my prey hasn’t realized it. But the leader has had enough.
They fight for dominance, as stupid half-wits like them will do at crises like this, and as expected, the leader wins. My chosen victim turns, and despondently trots away from the pack, lost and friendless on the savannah. He is easy pickings. I sprint over to the nearest watering hole, where I know he will go, and lie in wait. Deadly blades appear as if like magic in my hands. I tense, waiting. This is the chance of a lifetime, the crucial bit where I could fail. But it’s been too long. I will not fail. Not this time.
He approaches, catches a whiff of my scent. But it’s too late. I spring from my hiding place, blades outstretched, and aim for the neck. In seconds, it is over. I release him from my claws and let him fall to the ground. I bend over and lap up the blood welling from his severed spine, then roar my triumph to the world.
There is no one that can catch me, no one that can stop me. They are all weaklings, no match for me, and now they know it. But I will leave them alone, for a while, to give them time to think the threat is over before I attack again.
For now, the lioness is sated. 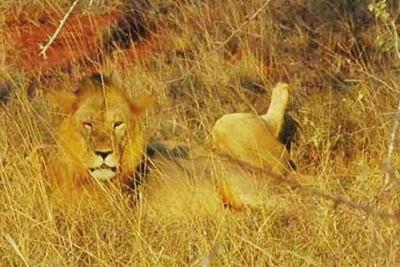