“Pappy, where do dreams come from?” Seven year old Talia asked her grandfather, Ol Farmer Joe, as she sat atop the wooden fence licking a root beer popsicle.


“Dreams?” Joe knelt down to pick up the bucket of slop only to be reminded by his firework joints that he wasn’t as young as he once was. “Dreams? Well, I ain’t one of them fancy scientists like your Daddy was, but I heard that dreams are-” He stopped and held his breath as he stood back up. The joints sang once again.


He looked at his granddaughter and smiled softly. From the freckles to the big green eyes, she looked just like her late mother. It brought tears to Joe’s eyes knowing how the child would grow up. An old man like himself was in no shape to take care of her forever. As it was, he could barely tend to his farm. Long ago when he was young and his wife was still alive, maybe Talia would have been able to stay. But it was only a matter of days before the state would take her away to one of those foster cares. And she had no idea.


Joe scratched his beard and looked at her again. “Dreams are the way your mind tells you things.”


“Do they ever go away?” she asked with that innocent tone every child seems to have perfected.


Talia hopped off the fence upon completion of the popsicle and wiped her mouth with the back of her hand. She sided up to her grandfather and took the bucket from his hand. Talia looked up at him with her bright eyes. “Even when you die?”


Joe was nearly in tears. “Well, I couldn’t tell you that.”


She nearly dragged the bucket on the burnt grass. “Do you think Mommy and Daddy dream about you and me?”


The old man took off his hat and placed it on Talia’s head. It was a little big and covered her eyes. She put down the bucket to tilt it back. Joe continued walking to the barn leaving his granddaughter to catch up.


Joe kept his back to her to hide the water trickling down his face. Talia was only four when her parents passed away. She shouldn’t have remembered them as much as she did. No child deserved to go through what she did and still remember it.


He wiped his face. “Just got some dust in my eye.”


She climbed up onto the hay bales and put both her hands on the rope hanging from the rafter above. “I think Mommy and Daddy dream about us.” She swung forward on the rope. “What do you dream about, Pappy?”


A car honked cutting him off.


Joe peeked his head out of the door and saw the black SUV with tinted windows. A tall man, young at that, dressed like a penguin slowly was getting out of the driver’s seat. Joe looked back over at his granddaughter. Happy, innocent, laughing. Then he looked at the car. Not everyone’s dreams could come true. 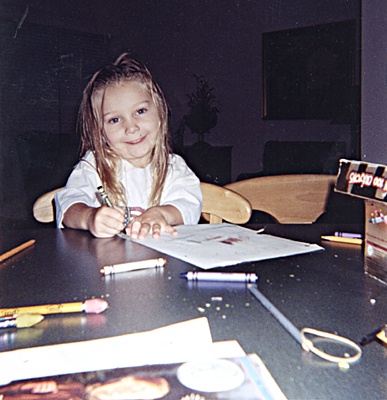