The Perspective of Parker Carson

Favorite Quote:
"Failure is, in a sense, the highway to success, in as much as every discovery of what is false leads us to seek earnestly after what is true, and very fresh experience points out some form of error which we shall afterward carefully avoid"John Keats

It’s one of those cloudy days when the air is clean and warm, but simultaneously cool and heavy. A breeze rustles the leaves as group of guys play with a football. They toss it amongst themselves. An occasional explicative splits the air. It definitely does not appear to be your typical football game. They separate on two sides of the pavement and throw it to each side. Apparently it’s every man for his own self. A kicker punts the ball and his shoe flies as well, resulting in guffaws from his companions. The sun brightens everything for an instant. No one can catch. They just make hoops with their hands like clumsy ballerinas lunging about with sweaty faces and exuberant vocals. One breaks from the routine and approaches.
“Hey, bo, watch my stuff,” says the tall, prima player. I nod as he places his hat, wallet, and phone on the table beside me. A simple task to conduct as the lumbering suite recommences. Maybe if they were rosined gymnasts the ball would stay in their gasping palms. They seem to be amiable friends; however, I do not mind in the very least being the odd man out. The group migrates indoors and I am obligated to relocate as well. Relief, free time is over, although it’s a shame to return inside during such docile weather. 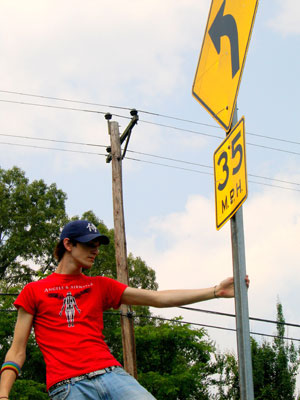 The author's comments:
Derrived from me watching guys horse around during free time.
Post a comment
Submit your own