Frowns at the Interview | Teen Ink

Frowns at the Interview

It was a strange day for Billy. Although, everything is strange in the eyes of a six-year-old boy. However, this day seemed particularly strange in Billy’s eyes.


During the early morning, as Billy was finishing his bowl of Cheerio’s, a strange man came over fully clad in a Navy vest and a few sparkling medals. Billy got excited because his Daddy had been serving in Iraq as a Navy Officer for quite some time. When he asked if Daddy was coming home, his Mommy told him to go away so she and the strange man could talk in private. Billy, excited as he was, unhappily went to his room after a bit of a fit.


After the man had left, Billy walked back downstairs. He was surprised to hear that the TV was on in the living room. As he trotted into the room, he was shocked to find his mother on the couch, blatantly crying. She was holding an old videotape. As most six-year-olds would, Billy ran over and tried to comfort Mommy. After a few minutes, his curiosity about the tape soared. He took the tape from Mommy’s hands, crawled over to the TV, and slipped it in.


Almost immediately, a strange image appeared on-screen. A soothing voice in the background said, “This was recorded on December 7, 1945 at the Washington Depression Clinic.”


The image faded and a black-and-white video started playing. A man, aging in his own miserable face, was sitting in a simple chair. The video had enough detail to show the obvious dimples that surrounded his lips, although he was not smiling. In fact, he was almost frowning in a way.


Billy got excited and looked at his mom with a smile. Her tears had stopped, but she was blankly staring at the TV. Billy turned back around and watched the video.


A young woman suddenly appeared. She was pretty, with flowing black hair and a complementary white dress. The man watched her intently through his weary eyes as she sat down opposite him. She had an air of confidence about her, but she was very happy at the same time. She smiled excitedly at the man, but he just stared back.


After a few moments of an awkward silence, the woman said,” Hello Mr. McArtney. My name is Jennifer Suttson.”


There was no response, just a piercing stare.

The woman looked down with red cheeks and cleared her throat. “Well, then. As you may already know, with World War Two wrapping up, the government is conducting a massive research on the War and the soldiers that participated in it. Since you played such a big part in the war, we have decided to interview you first. You worked your way up the ranks rather quickly. You participated in Africa, Japan, and Normandy. What compelled you to become such a great soldier?”


Embarrassed, the woman cleared her throat again. “Oh, uh….I mean, I heard that the government enlisted you. You did not sign up yourself. Why did you want to rise to the top of a job that you were forced to do?”


McArtney sighed. “I just do the job to the best of my ability. No questions asked.”


The woman quickly continued, “Your war mates said that your nickname was ‘Smiles’ because of the way you tackled each challenge with enthusiasm. Well, that plus your trademark smile, of course. Tell me, will you go home with that same enthusiasm?”


“It is hard to have enthusiasm after serving in the war for seven years.”


“I mean, will you have the same enthusiasm that compelled you during the War?”


“Is that what inspired you as a soldier? Because you have a family to go to?”


McArtney looked down and thought deeply for a moment. Finally, he looked up and said, “Let me ask you something.”


McArtney nodded his head and carefully thought about his next few words.


“You have no clue what it feels like. To be away. To be away from the people that you love for nearly seven years. Gone at war for seven years. You watch men die every day. They die for the sake of nothing. War accomplishes nothing. But when you see men die, from your side or the enemy’s, you cannot help but wonder if they had loved ones at home. You can’t even imagine how you would feel if you had not heard from your fiancée for seven years, and then all of the sudden find out that he died. You cannot imagine that.” McArtney was trembling, but he held it together. The woman just stared at him.


The woman stared at him with a clenched jaw.


The woman jumped on the opportunity’ “Do you mean Michael Fitz?”


“General, I’m sorry if that upsets you…”


The lady chuckled a little. Even McArtney’s face lightened up a bit, but immediately turned somber once again. He said, “Even Michael used humor on his deathbed.”


“Are you talking about the note that he wrote before he passed away?”


McArtney perked up. “What?” he asked.


McArtney gasped, “How do you know about that?”


“Sir, calm down. I thought you knew. That note was made public. It is a big topic of interest.”


The woman held up her hands in self-defense. “Sir, please sit down!”


McArtney ignored the command. “Who’s business is it, anyways? Mine and Michael’s! Only! Why should the rest of the world become involved in my personal affairs? Why?”


“Is this session being recorded?”


McArtney silenced her with a hand gesture. He slowly turned towards the camera.


After a long pause, he continued, “My nickname used to be ‘Smiles’. I used to smile all the time. All the freakin’ time! I held that trademark for a while. But I lost it. It is hard for me to smile anymore. Not after what I’ve witnessed.”


“This is a cruel world. I smiled when I read Michael’s letter. But, every day since, I have asked the Lord why the world is so cruel. There is no turning back. The world will only get crueler.”


Shocked, the woman whispered, “What do you mean?”


“I mean that if we don’t stop cruelty’s progress, it will overtake us. Soldiers today are glorified for their heroics. War is glorified. As we advance into the electronic age, there will be games that will glorify war. It will be fun to kill people in these games. All I know is that those kids that play those games haven’t answered the real call of duty. And for these people that make jokes about war, I think that you should make jokes in the face of war. That is the only way to overcome it.”


Both McArtney and the woman stared at each other in dismal silence for a few minutes.


Finally, McArtney stood up and said, “Whatever. I’m going home. Don’t send more meds to my room. I won’t be there.” With that, he limped out of the room. The tape turned off.


Billy turned towards Mommy. Her expression was the same as it had been when Billy put the tape in.


Billy slowly crawled towards her. He looked up and asked, “Mommy, is Daddy coming home?”


“But, Mommy, Grandpa John doesn’t live with us!” 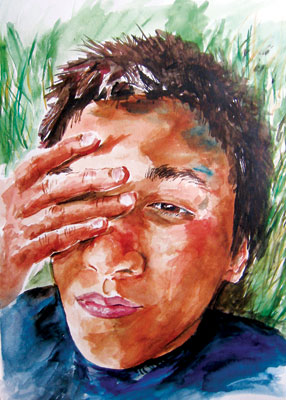 The author's comments:
This is somewhat of a sequel to my other story, 'Smiles.' Enjoy!
Post a comment
Submit your own

View profile
This is on pace to be my most viewed article ever. Already has the most rates out of any of my articles. I love it! Even if you do rate it low, be sure to add a comment and give me some constructive criticism! I will always be open to listen to your thoughts!
satellite23 GOLD said...
on Feb. 25 2011 at 5:00 pm
satellite23 GOLD, Cincinnati, Ohio
14 articles 0 photos 100 comments

View profile
Hey people! Satellite here! I've heard someone say that this story didn't make sense....because it is a sequel to my other story, "Smiles"! Read that first and you'll appreciate this story a lot more! Oh yeah...and I don't know if anyone caught the Call of Duty reference in here yet....just a little joke that I threw in, but I think it is still true....