Interview with a College Sophmore MAG

Myfriend Lisa is a sophomore at Harvard University in Cambridge,Massachusetts.

What did it feel like going from having your ownroom at home to living in a college dorm?

I felt like I was transported toa foreign country ... everything was different. I lived on the fourth floor of adorm that faced one of the busiest streets in Cambridge. At night I heard streetmusicians, car horns, buses, you name it. At home I lived on a quiet dead-endstreet!


What did you expect when you met your roommates?

Ispent the summers after my sophomore and junior years of high school on collegecampuses, living in dorms and getting to know many kids. Those roommates werereally fun people, and we had so much in common. I guess that is what I expectedfor my college roommates. I forgot the whole "I'mstressed-I-have-eight-hours-of-homework-and-papers-and-midterms"thing.


Describe the ethnicity on campus.

Harvard reallyprides itself on its diversity, and has strong affirmative- action policies toensure that minorities have a place in each class. My first year, I had a blackroommate and a Latina roommate who was from the Dominican Republic via Miami. Itwas the biggest culture shock I've ever experienced.

Sometimes I gotreally frustrated and disillusioned. I was mad that the United Negro College Fundpaid for my roommate's education, both at Harvard and at her preparatory academy.It's funny because in most of my classes of 50 students, usually ten are black.Everyone says there's a low percentage of African-Americans in college, but it'shigher than I expected.


What are the differences between highschool and college?

My college classes have had as few as 10 people and asmany as 300. In the large classes, no one cares if you go and most professorsjust lecture for the hour. There is little interaction, and if there is, it'susually an obnoxious question asked by a self-congratulatory student trying tostand out. The smaller classes have been wonderful.

My favorite class wasan expository writing class. We met in a living-room setting and didn't evenreally take notes. We just threw out ideas and talked about the reading, whichwere New Yorker and New York Times Magazine articles. We had a few theoryarticles, but nothing very heavy. We all knew each other's names, which wasawesome, though rare.

As for professors, Harvard hires the absolute bestin their particular fields. Every year several receive MacArthur Fellowships("genius grants" of $500,000 for contributions to academia and purebrilliance).

Most professors are extremely left wing, to the point ofexhaustion. One economics professor invented trickle-down economics and"Reaganomics." One government professor was Bill Clinton's roommate atOxford when they were Rhodes Scholars. And another literally invented thepunctuated equilibrium theory of evolution. These people are superhuman. Yet attimes it seems like none has any real-world people skills. They were taught tostudy and be brilliant, but not how to teach a group of 20-year-olds. Many areout of touch with students.

As far as attitudes and people? Name anattitude and at least 100 people have it. I know about 15 students who intend torun for president, and others who do not hide their desire to be CEOs. I knowsome who want to live the life of an academic. Everyone's out to prove him orherself, to stand out from this mass of incredibly talented people. It's intense,competitive and busy, but most thrive from the pressure.


Lookingback, is there anything you would have done differently in high school?

Iwould have joined the newspaper staff. I am writing for it now and havediscovered something I really love! I used to be too intimidated to join clubs ortake classes that sounded daunting. Harvard students don't test the waters,instead they jump into activities and their studies. If you waste your timecontemplating decisions or feeling incompetent, you get leftbehind.


If you were in charge, what would you change?

Hmm,I would increase recruiting from the Midwest! I feel like many students there arepressured, financially and traditionally, to consider only huge stateuniversities.

I would change Harvard's policy that students have to submitapplications for certain concentrations, and can so easily get rejected. Forexample, the interdisciplinary field of History and Literature requires anapplication and an examination. How ridiculous!

I'm a sociology concentrator, which means I study groups of people,how they interact, and what theory and policy says about these groups. I'mspecifically interested in media, women's issues, and work/familyintegration.

Do you see people with stupid majors?

I have receiveda lot of ridicule for being a sociology concentrator. There are no dumb majors! Ireally believe in a liberal arts education. I know a Sanskrit major and afolklore and mythology major, and they both love their areas.

Your majordoesn't have to determine your career. I feel like I have many options, I don'tnecessarily have to be a social worker. My advice is to study what you like, orat least something palatable.


Why did you pick yourmajor?

Sociology is a small department with a lot of personal attention.If I need to talk to my head tutor, he is accessible. Other concentrations mustgo through layers of staff and grad students to get what theyneed.


What are your plans after college?

At this point Idon't want to go to grad school. Because it sounds so new and interesting, I'dlove to tackle the business world. I want to wear a power suit! I think it wouldbe cool to work for a big advertising firm, but that's just my thought of theday. I change careers daily in my head! Journalism also seems veryfun.


Any advice for people planning to attendcollege?

Follow your dreams! When applying to college, don't just take theadvice of anyone from home. Do your own research, help yourself, discover allthat's out there. Don't go to college-bound consultants. I don't think anyone,including me, believed I would get into Harvard, but I took a chance on a longshot and it worked. You don't have to be the smartest, you just have to work thehardest. 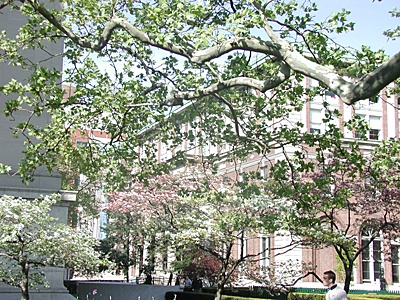