Much is being made of the inauguration of President Obama. But amidst all the celebration, I couldn’t help but think about how you must be feeling leaving office and transferring your position to another.

You served as commander in chief during one of our nation’s darkest hours. I was only 11 during the 2000 presidential election, but I was very interested. I saved newspaper articles during the recount process and kept them in a binder to show my kids when I tell them about one of the closest elections in our history.

I was 12 on September 11, 2001. I was so scared that I pretended nothing was happening. I tried to avoid the media coverage, but I could hear it blaring everywhere I went. Living in a small town in Alabama, I was nowhere near the attacks, but that didn’t keep me from feeling them. My family was supposed to go to an Atlanta Braves baseball game the next day, but of course all major gatherings were cancelled. So were airline flights. I remember how weird it was not to see or hear any planes.

I never would have guessed that more than seven years later, we would not have experienced another attack on our soil. But I do recall that American flags were everywhere. Suddenly, people who before had been against mentioning God were calling to him for help. For a brief time, our nation really came together. We remembered that we are all Americans.

In 2007, my family spent a week in Washington, D.C., and we absolutely loved it. One day we visited the White House. As we were walking down the hall, a security guard told my dad to look out the window. A Marine helicopter had been sitting on the lawn and just then we saw the soldier next to it salute, and suddenly you came into view. We all started screaming, “There he is! That’s the president!” When you boarded the chopper, you turned to give a wave.

I turned 18 the summer of 2007, so when the primaries rolled around, I registered to vote and did my homework on the candidates. I felt so ­satisfied after I cast my ballot, and I couldn’t imagine why people would not take ­advantage of the opportunity to choose our leaders. As the general election approached, I pored over newspaper articles and watched the debates on TV. I even dressed like Sarah Palin for Halloween, which was a lot of fun. It was interesting to see people’s reactions – both positive and negative.

In closing, sir, I would like to thank you for serving our nation, and for holding the U.S. together ­during the worst attack on our soil, two wars, and natural disasters like Hurricane Katrina. It was no mistake that you were elected as our president, even though Al Gore actually won the popular vote. I think you were the man our country needed. And now, as we rally behind our new president and prepare to face whatever comes, I want to say, God bless you, George W. Bush. And God bless America. 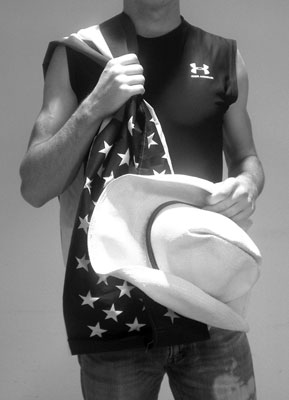 This article has 274 comments.

LightForce9258 said...
on Oct. 19 2020 at 8:29 am
LightForce9258, Ewing, New Jersey
0 articles 0 photos 8 comments
View profile
Even though George Bush made mistakes such as the Iraq War, his response to Hurricane Katrina, and the global recession of 2008, he was A respectable president. Especially after 9/11, he held us as a nation and we came together.
SomethingWitty said...
on Feb. 20 2014 at 5:03 pm
SomethingWitty, No, Other
0 articles 0 photos 22 comments
View profile
Thank you so much, you saved my fingers from having to type exactly that out. I'd also like to point out that the author of this article is right, his coming to office wasn't an accident. Because the Supreme Court (friends with the Bush administration) ruled not to recount the Floridian votes.
fireandrain PLATINUM said...
on Jan. 7 2014 at 8:01 pm
fireandrain PLATINUM, Wayland, Massachusetts
22 articles 2 photos 29 comments

Favorite Quote:
"People who think they are crazy enough to change the world usually end up being the ones who change it."

View profile
I agree, this writer did a great job writing the article and though I respect her opinon completly, I am a flaming Liberal Democratic so politically I disagree
Amelia_K SILVER said...
on Jun. 2 2013 at 8:56 pm
Amelia_K SILVER, San Francisco, California
8 articles 0 photos 66 comments

View profile
Do you know why George Bush served during two wars? He started them. He started them by lying to us about his reasons. Do you know why we're even in a financial crisis? Him. Before him, we had a surplus. Then he went and spent it all on stupid things, like the wars he started. I hope he left office cowering in shame. The way he treated poor people, gay people, women, racial minorities, and immigrants was repulsive.
LinkinPark12 PLATINUM said...
on Mar. 2 2013 at 9:14 am
LinkinPark12 PLATINUM, Lincolnshire, Other
45 articles 1 photo 198 comments

View profile
Very well written article, but George Bush was the reason 9/11 happened, in my opinion. But that's just conspiracy. Politics is all different in the UK anyway.
IndigoElisabeth SILVER said...
on Feb. 10 2013 at 9:42 am
IndigoElisabeth SILVER, Woodbury, New Jersey
5 articles 1 photo 171 comments

View profile
This is an amazing article, I agree with you completely.
Jacques said...
on Jan. 28 2013 at 1:29 pm
And you, clearly, didn't construct your sentence correctly.  No one is perfect, and judgement is exactly what brought down our society into the deep pit it's in now.  Please don't contribute to it.
WaterWatcher SILVER said...
on Aug. 26 2012 at 5:50 pm
WaterWatcher SILVER, Houston, Texas
9 articles 0 photos 27 comments

Favorite Quote:
"And When he shall die,
Take him and cut him out in little stars,
and he will make the face of heaven so fine,
that all the world will be in love with night,
and pay no worship to the garnish sun."

View profile
Okay, I can honestly say this is a very well written piece, even though I strongly strongly disagree with your politics. Myself, I'm a liberal democrat who would condemn the Bush administration, but I can admire your use of language and maturity. It really shows how the power of the written word can make us appreciate other opinions whilst respecting them at the same time.
lookatdatsoul SILVER said...
on Jun. 30 2012 at 11:11 am
lookatdatsoul SILVER, Rio, Illinois
7 articles 1 photo 7 comments

Favorite Quote:
Forgive him, for he believes that the customs of his tribe are the laws of nature. ~George Bernard Shaw

View profile
This was actually mailed to President Bush by you? Regardless of my own political opinions, this was well-written. So many citizens are apathetic when it comes to government, so I am glad you take an interest in politics.
schuy PLATINUM said...
on May. 19 2012 at 8:52 am
schuy PLATINUM, Chatham, Virginia
33 articles 4 photos 24 comments

Favorite Quote:
"Stop acting so small. You are the universe in ecstatic motion." ~Rumi

View profile
Thank you for writing this! Our presidents, whatever their political party, deserve respect. Bush had a tough job, and he did the best he, or anyone, could do.
Robert Close BRONZE said...
on May. 9 2012 at 3:41 pm
Robert Close BRONZE, Sunnyvale, California
1 article 0 photos 3 comments
View profile
Bush started both wars that the United States fought under him. He dug a hole that Obama got left with when Bush left office. I'd be surprised if he even earned his GED
dragonfly95 SILVER said...
on Mar. 30 2012 at 2:37 pm
dragonfly95 SILVER, Argaon, Georgia
7 articles 0 photos 66 comments

Favorite Quote:
"Offend the mind to expose the heart"

View profile
is that supposed to be a joke? cuz it's not funny
YourNeighborhoodArab said...
on Jan. 6 2012 at 11:02 am
Although I couldn't disagree more with your opinion, this was very well written and you backed your opinion up with some facts. We will just have to agree to disagree.
greatfriendsinger4 GOLD said...
on Nov. 15 2011 at 7:26 pm
greatfriendsinger4 GOLD, Omaha, Nebraska
10 articles 0 photos 6 comments

Favorite Quote:
Every night I hand my worries over to God. He is going to be up all night anyway.